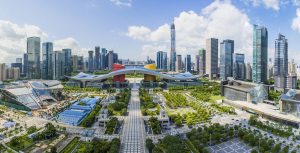 Skyscrapers that get lost in the clouds, smart traffic lights and the lack of paper money — 30 years ago, all this in Shenzhen looked like a cruel joke. At that time, a small fishing village for 30 thousand inhabitants did not have the status of a city, and it was difficult to even for a person with a rich imagination to imagine an unmanned bus plying along its roads. Everything radically changed the creation of the first special economic zone, where foreign investors were allowed.

Now the city is home to 20 million people, houses more than 90% of all household appliances in the world, and Shenzhen itself has become the technological capital of China. Most of the country’s leading IT companies are located in the city.

Today Shenzhen is an important industrial and transport centre, part of a huge economic region. It is one of the most technologically advanced cities in the world with a developed production and an innovative ecosystem aimed at copying, reproducing and creating new high-tech solutions. In Shenzhen, the idea of a powerful community has been implemented, incubators are working and all conditions have been created for the large-scale attraction of foreign investment to China.

In less than 30 years since the start of the China Development Institute, Shenzhen has become an economic leader in China, including in the telecommunications industry. The city annually attracts foreign investments from the world’s leading giants: the factories of Samsung, Foxconn, where they produce the iPhone and iPad, components for Canon, Sony, Microsoft, Cisco, the IBM research centre and enterprises DuPont, PepsiCo and Hewlett-Packard are located here.

The Development Institute develops financial and tax measures to stimulate entrepreneurship and production. He also carries out reforms at the local level. Their goal is to simplify the life of startups and businessmen as much as possible: they try to provide services in a “one window”, and use an intelligent system for tax accounting.

Administrative bodies of Shenzhen have extended powers, even the central government of China tries not to interfere in their work. This allows you to quickly respond to situations on the ground, develop and implement new ways to support companies. If successful, such practices are transferred to other regions.

The world’s largest hardware accelerator HAX is based in Shenzhen, as well as in San Francisco, which accepts projects at the seed stage. After passing the accelerator, startups apply for $100,000 in investments. HAX assists in design, engineering, and provides expert support. Startups are helped by the fact that the accelerator is located near real production facilities, which reduces the delivery time for almost any parts: order in the morning — delivery in the evening. A test batch of products arrives in a few days, not months, as in most other regions or countries, which significantly reduces the time to market.

The city has developed prototyping laboratories. Hubs like the X. Factory gathers people to learn advanced technologies for the design and manufacture of products from wood, metal and plastic, using both the standard equipment and modern 3D printers.

The growth of the population’s ability to pay, the influx of people from other cities and foreign investment stimulate an increase in demand for education, entertainment and tourism. The city is increasing its capacity every year. Thanks to the created ecosystem, it is increasingly difficult to compete with Shenzhen not only for large cities but even for entire countries.