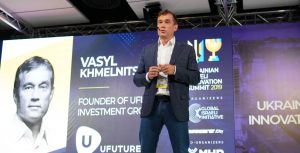 A Valley in a Desert: How Israel has become the leader in the global startup market

On October 30, UNIT.City held the Ukrainian-Israeli Innovation Summit. Israeli investors, entrepreneurs, representatives of companies with a total capitalization of $35 billion came to Kyiv. Now, Israel is the second-largest startup ecosystem in the world after the US.

Vasyl Khmelnytsky, founder of UFuture holding company, noted that interest from foreign investors in UNIT.City innovation park was growing and expressed his hope that it would be possible to create interesting profitable projects together with Israeli partners in Ukraine.

“We often visit Israel and use many technologies that we learn in this country. For example, an Israeli company made a security system in UNIT.City. We love Israel, we see it as a strategic partner of Ukraine. The problem of the economic growth of our country is that we have little experience. Come to us, we are open to cooperation,” Vasyl Khmelnytsky said.

Jonathan Medved, the founder of the world’s largest crowdfunding platform for investors, OurCrowd, told about a unique model for building a successful IT-companyas well as how the Israelis manage to turn their shortcomings into benefits.

“Everyone knows that venture capital investment is now booming. And Israel now has $8 billion of venture investments. In terms of investment, Israel doesn’t lose to Silicon Valley. It attracts international corporations very much, a multinational company comes to Israel every two weeks. Now China has the same number of startups as Israel. And I can tell you why we have such a place in the startup ecosystem. We know how to act like in the Eastern martial arts: take the negative energy of the enemy and turn it into an advantage. For example, we don’t have water, but we are the global leaders in water treatment technologies. In our country, everyone serves in the army. Yes, the army is evil in some sense, but there we teach people to overcome difficulties. Another drawback — we’re a tiny dot on the map, that is — we have no resources at all. Therefore we focus on human resources. We also pay great attention to education,” John Medved said.

CEO UNIT.City Dominique Piotet said what his team was doing to develop the startup ecosystem in Ukraine.

“What we see in UNIT.City today is just 7% of what is planned to be constructed. Today, there is a school where we teach people for free, it’s a unique case. We do it because we’d like these people to stay in Ukraine. We believe that they need not only coding, but also entrepreneurial skills. We need them not only to solve technical problems, but also to learn how to manage people and take risks. Yes, there will not be as many startups as in Israel, there will be its own specificity. We need to look at our own model. No matter how much money is invested, it is impossible to build an ecosystem without a talent. We need to look for our managers, our people, our talents,” Dominique Piotet emphasized.

One of the youngest participants of the summit, Itay Pincas (18 years old), founder of SaleUp, ranked in the Forbes “30 Under 30,” inspired the audience with his story about how he had begun his career in the technology industry (or more precisely — when) and told how an employer can cope with the new generation.

“I’ve started programming at the age of 10, and launched my first app on the App Store at 12. Today I’d like to tell you some insights about the “Z” generation. Generation “Z” is thought to be born between 1995 and 2000, to not be able to socialize, to be irresponsible and impatient. But this is the first generation that does not know life without the Internet. That is why we have an element of quick satisfaction of our needs. Think, if you’re used to consume 10 hours of content from the Internet a day, would you pay a little more attention to other sources of information? Probably, no. And this is the main thing that sets this generation apart — we want to save time. We review the app for 10 seconds before downloading it. If you want to hire my generation, then you should not offer them big projects. Your task is to break the project down into small achievable tasks for which you can give bonuses,” Itay Pincas said.

Amir Rapaport, founder and president of Cybertech, spoke about how the army helps Israelis succeed, how the world is changing technologically, and how to use these changes using human talent.

“In Israel, it’s very easy to get investment, because we have a very active ecosystem. We are the third-largest after the US and China on investments in cybersecurity. We have 20% of the global market in this industry. Cyberspace is a continuation of the industrial revolution. We are now in cyberspace. And this has started not even 10 or 20 years ago. We are now like in the 19th century when people came up with planes. This is just the beginning. We believe that cyberspace is a new space like the sky or the earth,” Amir Rappaport said and added: “I think that Israel is one of the few countries with mandatory conscription. This allows us to choose the best. For example, in digital units. Army selects the most talented of all and trains them. After 5-8 years, they are experienced specialists in the global market. It is also important that we are not afraid to make mistakes. And we are very international — as soon as we launch a company, we immediately think of scaling it globally.”