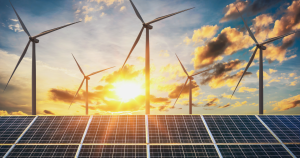 Instead of digging mines and drilling wells, the emerging energy market leaders are fighting for the global economy differently. The new type of conglomerates’ priorities is constructing and purchasing “green” and “clean” energy facilities. At this very time, traditional market players sometimes consider all alternatives to be unreasonably expensive and ineffective, thus giving away the keys to their territories.

In turn, Ukraine is not lagging in an industry that can change the world for the better. The painful transformation of outdated production facilities and coal mines is taking place against the rapid development of green technologies.

The sun and wind are replacing coal, and their share in the energy balance is growing every year. The green energy industry is capitalizing, global players, are entering the domestic sector. This process is clearly illustrated by the example of the investment and development UDP Renewables (its strategic investor is UFuture). The company is closely cooperating with global giants in solar generation and is now moving to more capital-intensive wind power, developing a Volyn pilot project.

Reducing the cost of solar panels and wind turbines contributes to strengthening the position of the “green” players, and more this industry in Ukraine needs established rules of the game that do not change “retroactively”. And while we are solving our “civilizational” problems, a real energy revolution is raging in the world.

Its impossible not to invest

Today, investors are interested in an energy company’s portfolio, which can be measured in megawatts of wind and solar. A global transition to environmentally friendly sources is the only chance to avoid climate change’s most catastrophic consequences. Over the next 30 years, this will require investing $11 billion in renewable energy sources — and investors are ready to support this move.

An example of a state initiative

China is shifting its largest state-owned energy companies to renewable energy sources. Back in 2017, two East Asian conglomerates merged to form China Energy Investment. According to Bloomberg NEF, the corporation has about 40 gigawatts of renewable energy production capacity, which is more than any of the European and American companies. Of course, coal is still a considerable part of China’s business — 185 gigawatts of thermal power were produced in 2019. Unlike the largest clean energy operators in Europe, China Energy is almost entirely focused on its big domestic market.

NextEra Energy Inc. from Florida is a utility company that briefly surpassed Exxon Mobil Corp. by market capitalization in early October 2020. This event was preceded by an essential stage in the transition to renewable energy, which until recently seemed unthinkable. Exxon has been stripped of the title of America’s most valuable energy company due to logistical problems caused by the pandemic for the entire oil and gas sector. While former leaders tried to get things back on track, NextEra Energy has created the world’s most extensive collection of wind and solar power plants.

And this is not an isolated case. Renewable energy businesses such as Enel, Iberdrola and Orsted are now worth more than the time-tested oil giants, as clean energy, not fossil fuels, has become an essential bet for investors.

The red ocean is still “green”

Five years ago, it seemed that the renewable energy market had already become a red ocean, overflowing with newcomers who were trying to grab a piece of the market, just developing. But it turned out that there will be enough place “under the sun” for everyone in the coming years. Today, green energy is considered such a safe bet that pension funds and insurance companies compete for large portfolios of solar and wind farms. Indeed, global renewable energy consumption has skyrocketed over the past decade as interested companies have more than doubled the amount of electricity they can produce with zero-emission technologies. The early adopters became major players, thanks in part to generous government subsidies when renewable energy was not commercially viable. Thanks to the active conclusion of deals and lobbying of the past 10 years, companies have grown, gathering to the highest peaks, which separate them by hundreds of per cent from the start indicators. Sustainability as a reason for expansion Renewable energy sources are now cheap in some parts of the world. According to Bloomberg NEF, wind and solar provide about 9% of the world’s electricity. Their share should grow by 56% by the middle of the century. Many large companies that are now dealing with renewable energy sources started with fossil fuel production but later realized that it was necessary to invest in energy from renewable sources. More and more energy businesses across continents are ditching coal, the dirtiest fossil fuel, or planning to do so soon. Many have also committed to reducing their carbon footprint by 2050.

In the electric power industry era, green companies have begun a global hunt for places where the sun is shining brightly and the wind is blowing steadily. Super-large solar farms are already spreading across desert stretches from Morocco to Chile to Australia, while the battle for the wind is increasingly taking place at sea. It is sea wind gusts that are a sector of the fierce struggle of companies. Danish energy business Orsted set sail for years to install skyscraper-sized wind turbines in the waters surrounding Europe. With such capacities, the Danes are striving to provide the United States and Asia with renewable energy.

From oil to green

While European renewable energy portfolios are overgrowing, the oil industry also has the scale, experience, and ability to acquire, if not competitors, the latest developments that will help outpace green opponents. For example, Royal Dutch Shell Plc has invested in renewable energy companies and electric car charging networks. The Spanish company Repsol SA currently invests more in renewable energy than in oil and gas production.

The world doesn’t standstill. It is driven by a powerful mechanism of self-preservation and the use of life in all forms. Today, a sufficient amount of evidence confirms that money and the innovations of conscious consumption turn newcomers into leaders and large players into outsiders.