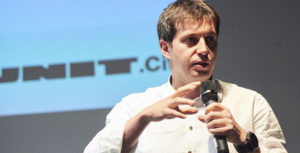 Max Yakover, CEO at UNIT.City: One does not simply bring Apple, but we’re working in that direction

How the first Ukrainian innovation park UNIT.City lives and develops, and whether Apple will open an office there

Two years ago, a large construction project began on the site of the former Kyiv motorcycle plant, which was acquired by businessman Vasyl Khmelnytsky in 2012.

Later, it became known that an innovation park, UNIT.City, will be built on a large area comparable to 35 football fields.

The project has turned to be very ambitious and large in size. As Khmelnytsky said, the total investment in the project is estimated at from $100 million to $400 million for 10 years.

In early 2017, two managers, Maxim Bakhmatov and Max Yakover, who successfully launched the National Exhibition Center of Ukraine (formerly known as the Exhibition of Achievements of the National Economy of Ukrainian SSR, or VDNG), unexpectedly left their posts and became heads of UNIT.City. Then it became clear that the project is having a great future.

LIGA.net met with CEO and Managing Partner of UNIT.City Max Yakover and published the most interesting parts of his story.

I think we did a lot for the VDNG. But two things are the most important. Firstly, we showed how a small team of five people could take a state-owned enterprise and make it interesting, profitable and promising. Secondly, we made the VDNG part of the city’s map. At that time it no longer existed in the information space, it had only abandoned buildings.

I am very glad that the new head of the complex, Evgeny Mushkin, continues what we started. We shared a full set of events, partners with him, and the VDNG continues to develop and grow.

About the causes behind the decision to leave

The story is as follows. I met with my old friend, Vasyl Khmelnytsky’s partner, and showed him the concept of the development of the VDNG. He praised the concept, but asked how much time we would spend to prepare the documents. I said that if it was very quickly, then it would be done within two years. He replied: “We will build here everything [UNIT.City] in two years.”

We came to the VDNG with a dream that we would be able to build an innovative center. But we ended up in a place with ongoing litigation: people needed to be paid delayed salaries and there were many other problems. And we realized that it was still where to grow to reach the zero level.

Now I come to a privately owned facility where there is an investor coping with this task. He himself has visited about 40 technology parks, or technoparks, and has a background in the construction sector. Now we have absolute synergy. I do not need to deal with issues of construction, cleaning the area, servicing and so on.

Why an innovation park?

Where did the innovation parks come from? We came up with this term on our own. Initially, there were business centers. The concept of business centers ended somewhere in the mid-1980s. Then the concept of technoparks began to develop. As a rule, a technopark is developed by the state or public sector, is located on the outskirts of a city and its core business is science. As a rule, it houses a large corporate R&D center or university.

Since the mid-2000s, something has changed. It became clear that innovations come mainly from the youth, and they have very different requirements for infrastructure, creative atmosphere, society. Other infrastructure facilities started to grow around them. In the West, they are called innovation quarters or territories of innovation. We defined them as innovation parks. This is the place where you create, study, live and relax.

About the motorcycle plant

The plant’s background: after the Second World War, equipment from a BMW plant was taken away and transported to Kyiv under a war reparations program. It should have manufactured “Soviet BMW” vehicles, but it turned out the other way. Yet, the plant manufactured several legendary models, for example, the K750 motorcycle.

I was once told a story that in the late 1990s someone came to the plant and asked: “Oh, you have produced a new model? And where did you get it?” “We’ve made a replica of a Chinese [model],” they answered. Then it became clear that the plant was dying.

I would say that we came to an old, abandoned industrial zone and are now building a city there. In April 2016, there were abandoned buildings without windows and doors. The last motorcycle was released somewhere in 2005-2007.

About the pace of development

Our task is not just to build a fish tank and put some fish into it. We start with growing the fish. So, first of all, we’ve built a school. Now about 800 students study at UNIT Factory. Next year their number will grow to 1,000. They study free of charge. We’ve selected the most talented people from among 15,000. Next year, there will be the first graduation. During the training they have two internships at real companies. We hear feedback from these companies – and they are very surprised by the quality of the students’ knowledge and skills.

In January, we’re opening a coworking space, which will have average market prices. There are now 35 small companies, three laboratories and two accelerators in the campus we’ve opened.

Today we have built a mere 2-3% of the total area. Now we are building four campuses, and they will be ready by the end of next year.

Will there be offices of foreign companies at UNIT.City, for example, that of Apple?

Negotiations are under way. One does not simply bring Apple. We are now working with them. We are holding talks on launching their educational program in Ukraine, for a start.

They say Khmelnytsky is going to build the area with real estate.

It’s all very simple. To build something, one needs to draw up a general plan of an area. Now this detailed plan of the area will be discussed at a Kyiv City Council session. One and a half weeks ago, there was a town-planning council where [Kyiv Mayor] Vitali Klitschko and all the architects were present. They supported what we’re planning to build.

They see that for the first time an investor arrives in Kyiv to build a facility with a 10-year payback period. He’s building not just housing, he’s building huge education and business infrastructure.

I think housing will account for a bit more than 30%. The remaining are educational institutions and offices.

When do you plan to reach profitability?

We can achieve operating profit in two years. In general, the payback period of such projects is much longer if they pay back at all. We’ve analyzed the subject: 86% of such facilities in the world are either subsidized by the state, or exist with the participation of the state or at the expense of large grants. And only 14% are those who are ready to invest their own funds at their own risk.