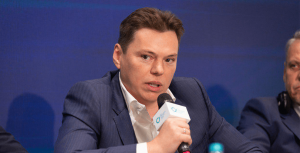 Kostyantyn Efymenko: “Its time to acknowledge the shortcomings of the blood service and join forces for a healthy future”

UAH 1 billion — is the amount for which Ukraine annually imports blood products. A similar situation is dictated by internal needs, illustrated by cynical figures:

Biopharma’s President Kostyantyn Efymenko is convinced that the problem has solutions that are already being implemented. In particular, in September 2019, Biopharma, a state-of-the-art fractionator plant, opened in Bila Tserkva with $75 million invested in production. Another $11.5 million has been invested by Biopharma’s investors in four newest plasma centers in Sumy, Dnipro, Kharkiv, and Cherkasy.

According to Kostyantyn Efymenko, one of the reasons for the high prevalence of diseases transmitted through the blood and its components is poor and outdated blood service that needs to be improved.

Read more about importing blood products, meeting the state’s domestic needs to improve treatment levels, and developing the industry, on Kostyantyn Efymenko’s column for Epravda: “The Soviet Legacy of the Blood Service: Will Its Competition Change?”