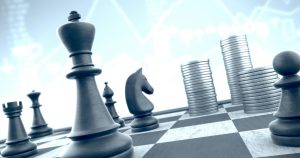 The influence of the cultural environment on consumer decisions to buy is in no case less than the amount of money in his account. Of course, this pun would not be taken seriously, if the fictional cult characters increasingly did not determine which car to dream about, in which sneakers to run and in which games to play. Evidence is mad sales jumps after watching the miniseries or a complete rethinking of consumer lifestyles and the emergence of new everyday rituals.

1084% – that’s how much chess sales‚ — a game that was invented in the sixth-century ‚ — after the release of the incredibly successful miniseries “Royal Gambit” on the streaming platform Netflix. One could be even more surprised if the premise were not noticeable — 62 million users watched the series in the first month. As the number of views grows, so make the sales of wooden boards and black-and-white figurines worldwide.

The New York Times reported that interest in the board game was growing for several months before the series. The demand is probably provoked by the fact that people began to search more intensively for entertainment during the pandemic. But the hype generated by the series about an orphan, a chess prodigy in a male-dominated world, has exceeded all logical expectations for growth in interest in the game. The cultural product quality undoubtedly influenced such a crazy leap because ordinary viewers and professionals in the chess industry noted the series. Harry Kasparov himself — the legendary grandmaster — became a consultant on party planning during the filming.

The moment when the cult character, known by the phrase: “Run, Forest, run!”, Took out of the box the classic running white Nike Cortez with a red logo, made the shoes a phenomenon. The model of sneakers was developed by one of the founders of Nike, Bill Bauerman. It was introduced almost 20 years before the movie “Forest Gump”, which made the shoes wildly popular. The sneakers went on sale after the American track and field team performed in Munich’s Olympics. More than one generation has already seen Robert Zemeckis’ 1994 Oscar-winning film, and this no doubt still makes sneakers an immortal object of consumer desire.

A piece of cake

According to Time, the history of television can be divided into two eras: before and after the appearance of the series “Twin Peaks”. Many well-known modern representatives of the industry, who are involved in creating no less cult film and television products, spoke in support of this statement. The fact is that “Twin Peaks” in 1990 showed the world how strange and unusual life is in one-story America with the cult of black coffee and cherry pie. As for the second consequence of the impact, for almost 30 years, themed cafes have been continuously opening worldwide, not only within the United States and Canada, where the events of the series took place but also in Europe and Asia.

According to a search resource and Yelp reviews, many users notice the cherry pie in most cases. The atmosphere of the series, created more than two decades ago, still leaves its mark in the fashion industry. Twin Peaks has become an inspiration for designers of such famous brands as Christian Louboutin and Kenzo. David Lynch himself, the director and leading ideologue of the series, personally collaborated with fashion houses. For Kenzo, the famous cinematographer even staged the set in Paris.

Cultural phenomena provide excellent service to the economy, creating new jobs and demand for products and services. A business needs to use “cultural weapons” competently, understanding its client and the goal’s compliance with the chosen means. After all, this is an excellent chance for long-term success because changing the culture of consumption contributes to forming new sustainable social relations and habits.