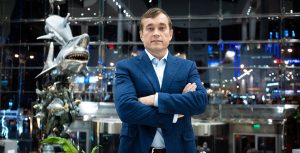 Vasyl Khmelnytsky, Founder of UFuture, confirmed his intentions to acquire a part of the shares of the leading capital shopping and entertainment center.

“The fact that we know the facility very well played a significant role in the decision to buy 33.5% of the SEC’s shares. In 2012, my partners and I sold Ocean Plaza. I have sold, I think, very well, given the continued decline in the value of the asset due to the overall collapse in the real estate market. Recently, it has become possible to re-acquire a stake in the facility on fairly favorable terms. We became aware that the composition of the asset owners had changed. British businessman Rodney Coffey acquired 20% shares, and another British businessman Colin Laird bought 13.35% shares. Our holding company has initiated negotiations with these companies, and we’re glad that at first, we managed to negotiate with one and then the other Britons about the sale,” Vasyl Khmelnytsky commented.

Ocean Plaza shopping mall on Antonovycha str., 176 in Kyiv with a total area of 165 thousand m² was opened in December 2012.

“I consider the agreement successful, as the market has a steady trend towards increasing the value of such objects. Retail isn’t a profile area for our company. I don’t exclude that over time we will resell it. Such precedents have already been. For example, we sold one of the Kyiv enterprises, then bought at a large discount, and then sold again. The agreement is currently in its final stages. We look forward to agreeing with the concentration of the stake in the Antimonopoly Committee of Ukraine. We are sure that this procedure will not cause difficulties,” the entrepreneur added.