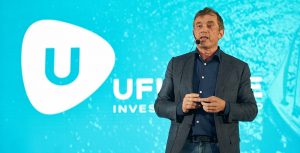 On April 11, 2019, more than 700 people, including about 500 representatives of small and medium-sized businesses, attended the Innovative Production Development Forum in Bila Tserkva Industrial Park.

The building of the enterprise was constructed according to the international standard BREEAM (compliance with about 50 criteria of green building). In two months, the plant will receive European certification ISO 9001 and OHSAS 18000. Production will be distributed both to Ukrainian and European markets.

According to the founder of UFuture Vasyl Khmelnytsky, $2.8 million was invested in the enterprise. The aim of the company is to occupy 20% of the Ukrainian market of electrical accessories, which is estimated at up to $50 million. The investment is expected to be returned within five years.

Vasyl Khmelnytsky is convinced that the labor force in Ukraine should be skilled and highly paid, and production should be effective. The result of this approach will be high-quality and affordable products. The founder of UFuture urged the participants of the Forum to use Lean technologies that have proved to be effective in the group’s businesses.

The head of “Epicenter K” Halyna Hereha who also gave a speech at the Forum urged entrepreneurs to stay in Ukraine and develop their business in the Motherland. Today in Ukraine, there are 50 “Epicenter” and 14 “Nova Linia” malls with a total area of 1.5 million square meters.

According to the president of Lean Institute Ukraine Serhii Komberianov, Plank Electrotechnic was originally built using the Lean methodology. Implementation of Lean technology and improvement of all processes at the new enterprise should be permanent.

As Chief Executive Officer of Bila Tserkva Industrial Park Volodymyr Khmurych said, the opening of a new plant marks the beginning of the development of the innovative production cluster Plank, specializing in products from high-tech materials in the electrical, construction and machine-building industries. This year, the construction of three new plants will be started in the industrial park, and in the next four years, 20 modern enterprises are planned to be built.

Bila Tserkva Industrial Park can be called a hypermarket for factories. Here one can quickly scale their business without unnecessary administrative and bureaucratic obstacles. Entrepreneurs can rent or even buy land along with all the necessary communications and support.

President of the “Biopharma” company Kostiantyn Yefymenko said that the residents of the industrial park can save a lot of money and time. According to the company’s president, $7.5 million was spent on the provision of communications at the initial stage of the construction of “Biopharma” plant. And in Bila Tserkva Industrial Park, all the necessary infrastructure is already provided.

At the end of the Forum, Vasyl Khmelnytsky said that his goal is to hold this event in Bila Tserkva Industrial Park annually, and every time at a new plant. According to the entrepreneur, Ukraine needs to follow the examples of China, Turkey, and Poland in creating economic incentives for investors and opening hundreds of industrial parks to develop economics in the state. “We have already begun. Join us!” – the founder of UFuture said.