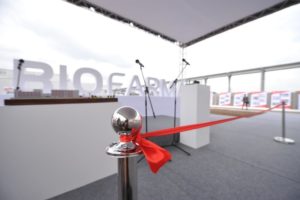 Bila Tserkva, June 16, 2015. Thegrand opening of the BIOFARMA innovative biopharmaceutical research and production facility was held on Tuesday. The ceremony was attended by the Minister of Healthcare of Ukraine, Ambassador of Canada, representatives from the embassies of the USA and other countries, the Head of Kyiv State Regional Administration Volodymyr Shandra and representatives of international financial institutions. During the event, the management of BIOFARMA handed over to the Minister of Healthcare of Ukraine Alexandr Kvitashvili a range of medicines of its own production for 1 million UAH to meet the needs of the Ministry of Defense of Ukraine; the medicines will be used for the treatment of wounded ATO soldiers. In addition, the laying of the foundation stone of the future facility for the production of medicines from human donor blood plasma, which will be the largest facility of its kind in Eastern Europe, was held.

“The new BIOFARMA research and production facility represents world quality pharmaceuticals in Ukraine. Furthermore, it is the first pharmaceutical plant in the country built from scratch over the past 100 years. And it is the largest foreign investment in the history of independent Ukraine into the pharmaceutical industry. It is, without exaggeration, the beginning of a new era in the development of the domestic pharmaceutical industry in terms of technology, working conditions and environmental standards”, commented Oleksandr Makovsky, the CEO of PJSC BIOFARMA

“We are implementing the most ambitious investment project in the pharmaceutical industry of Ukraine. Launching the new facility is a truly remarkable event and a living proof of Ukraine’s investment attractiveness, as well as an incentive for further increase in foreign investments. With the launch of this plant, BIOFARMA will become the leader in efficient and modern production technologies in Ukraine, will create about 300 jobs and will expand the opportunities for further export growth and foreign exchange inflow in Ukraine” said Kostyantyn Efimenko, the Chairman of the Supervisory Board of BIOFARMA

The modern biopharmaceutical research and production facility was built with more than $40 million invested by  Ukrainian and foreign investors, including American company Horizon Capital and FMO, a Dutch development bank in a record time of just 15 months. The facility includes a pharmaceutical plant, a quality control lab, a R&D center, a storage area for finished products and raw materials, an administrative building and a power generation plant. The facility was designed by Linde (Germany) – an international engineering company with extensive experience in the pharmaceutical industry, – and is fully compliant with the modern regulatory requirements and the GMP standards.

“It is a great honor for me to be here and I know that this 40 million investment will be followed by more investments”, stated at the opening ceremony Minister of Healthcare of Ukraine Alexandr Kvitashvili. “We want the pharma sector to develop and be competitive. It is important to work with foreign companies, but we also want Ukrainian companies to be successful on international markets. All my life I have been trying to support the development of private business and to me such an investment is the best sign of a normally developing pharma industry” added Minister

William Laitinen, Counselor for Economic Affairs of the US Embassy in Ukraine noted: “This is the proof that investment in Ukraine continues during these critical times of reforms and that investors, including Ukrainian, American and Dutch are committed to the country and believe in its economic potential”.

“This investment underlines our confidence in both Ukraine’s pharmaceutical sector and in Ukraine.  I would like to thank Biofarma management team for their excellent leadership and thank my fellow shareholders for their cooperation.  We are confident that the quality of Biofarma products and the doubling of capacity enabled by the launch of this new facility will drive success to even greater heights.  We commend the Company for successfully serving the domestic market and also exporting to over 10 markets worldwide, clear evidence of the quality achieved.  We are also proud to join with FMO and our Ukrainian fellow shareholders to invest real capital and create real high-tech jobs at a time when foreign direct investment and job creation is critically needed in Ukraine.  Most of all, we are proud that Biofarma produces plasma-based drugs for victims of severe injuries and burns, for people fighting cancer, for pregnant women and others who need this help the most.  In addition to producing life-saving drugs, through its generosity, Biofarma is also supporting Ukrainian soldiers injured in the ATO.”  said Lenna Koszarny, Horizon Capital Founding Partner and Chief Executive Officer

Idsert Boersma, Director Legal of FMO, commented: “We are pleased with the investment into BIOFARMA’s new state-of-the art production facility and we are confident that the lifesaving drugs BIOFARMA produces will become more affordable for the Ukrainian people, while its high quality will further pave the way to international markets and provide a base for even stronger growth”.

The future blood plasma fractionation facility, in which additional 30 mln US dollars will be invested, will increase the existing plasma processing capacities, which currently stand at 90 tonnes per year, more than threefold. The construction of the plant will make it possible to fully provide the Ukrainians with domestic plasma products that are on par with the imported analogues, but are more affordable. Moreover, it will encourage reforms, including active development of the blood service in Ukraine. The plant will produce drugs such as immunoglobulin, albumin and factor VIII. These drugs will be produced employing the company’s own technology that has been developed by the BIOFARMA research & development lab and successfully passed the examination of the specialized Paul Ehrlich Institute of Vaccines and Biological Medicines (Germany).