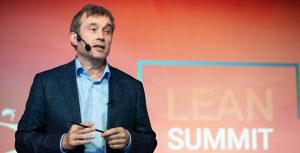 The first Lean Summit in Ukraine was held at UNIT.City

May 16-17, Lean Summit was held for the first time in Ukraine with the support of Lean Global Network. The invited speakers – the founder of UFuture Investment Group Vasyl Khmelnytsky and owners and top managers of such companies as Kyivstar, Nova Poshta, Alfa Bank, MHP, Biopharma, “Kyiv” International Airport – demonstrated the effectiveness of lean tools using the examples of their enterprises.

Lean Institute Ukraine (the representative of the world-wide organization Lean Global Network) gathered over 250 people at the country’s first Lean Summit. The event was held at UNIT.City.

According to Sergiy Komberyanov, the president of Lean Institute Ukraine, the summit was the institute’s report for the world community about the achievements in implementation of lean thinking in Ukraine.

The key speaker of the event was Vasyl Khmelnytsky, Head of the Supervisory Board of Lean Institute Ukraine, an entrepreneur who uses lean technologies in each company of UFuture Investment Group and has made significant efforts to popularize the lean culture in the country.

“In Bila Tserkva Industrial Park, we are currently building four plants, and all processes from the very beginning are based on lean-technologies. And we have created the lean service not only for our own businesses. For anyone who wishes to open a plant in the industrial park, we offer to build it with the help of lean tools, according to BREEAM green technologies and according to European standards. The goods produced with the help of lean methodology are cheaper, of a higher quality, and more competitive,”Vasyl Khmelnytsky said.

Peter Willats, a member of the Supervisory Board of Lean Institute of Ukraine, the former CEO of Cancer Partners UK management, that built and manages the largest network of private cancer clinics in the UK, described how the lean tools helped him significantly improve the bandwidth and the level of service in London’s leading pediatric clinic as well as reduce the number of canceled operations through redesigning of the systems and practices for managing the flow of patients.

Volodymyr Popereshnyuk, co-founder and co-owner of “Nova Poshta,” shared the experience of introducing lean in his company. According to Volodymyr, who in 2001, together with his partner Vyacheslav Klimov, founded the company, his team started using lean technologies about 5-6 years ago. And now, thanks to lean, the time a client spends at “Nova Poshta” is significantly reduced by a well-thought-out system of parcel placement, an open-space system without back-office, and a multi-level improvement of the staff, which continues today.

Vasyl Petrov, continuous improvement manager at EMEA Cargill Business Service Bulgaria, who have consulted the teams of British Airways, Delta Airlines, Siemens, SAP and other companies on how to apply lean thinking in Europe, Asia and the United States, spoke to the audience about the way lean technologies combined with automation processes considerably increase the efficiency of enterprises. According to Vasyl, it is important that the leadership of each company understands the principles of lean and skillfully uses them.

Pavlo Harikov, strategic projects manager at Alfa Bank who is responsible for creating infrastructure for the continuous improvement of business processes, shared his experience on how lean methods have helped significantly reduce the time a client spent on signing agreements with the bank, minimizing queues, and significantly accelerating the time of salary crediting to bank cards. Pavlo also demonstrated the effectiveness of the 5S system for the organization of work space in the company’s offices.

Olena Murovtseva, director of the business terminal “B” of “Kyiv” International Airport who has many years of experience in implementing lean in the service functions of the company along with Peter Willats, described how the lean tools helped her to almost eliminate cases of luggage loss, reduce the time of arrival to the terminal from 70 to 11 seconds, to strengthen communication between the personnel, introduce the necessary automation improvements of systems.

Inna Chernyavska, project manager at PrJSC Myronivska Poultry Farm, said that the atmosphere of trust should be on every enterprise. This allows employees to report about the problems to the managers fast. Inna added that standardization is the basis for improvements at Myronivska Poultry Farm. Lean technologies helped their team to minimize losses in many aspects and they aren’t going to stop, as Inna Chernyavska believes that “everything that can be measured can be improved!”

Illya Polshakov, director of transformation in Kyivstar, responsible for developing and implementing innovative projects and managing customer experience, noted that lean is not a project (sometimes, employees who don’t like changes may think so), it is a culture that allows every employee to be involved in leadership of change management. Illya told about the effectiveness of the corporate lean academy, which helps staff see the problems in production and learn how to solve them.

Dmytro Makarenko, chief financial officer at Biopharma who is responsible for attracting investments to the projects and implementation of the lean methodology, explained how his team managed to reduce the length of the production cycle, minimize the downtime, improve the quality of the product and make improvement processes continuous.

The last speech was given by Andriy Dmytriev, a consultant at Lean Institute Ukraine, who reminded the audience that the responsibility of management and employees was to see problems and react to them. Andrew added that every problem needs to be perceived as an opportunity for improvement. And in each case, you need to look for deep causes and select the appropriate lean tools to eliminate them.

President of Lean Institute Ukraine Sergiy Komberyanov, who joined the final performance of his colleague, concluded that the most important thing for lean-specialists is that, after finishing consulting a company, the principles of lean were not forgotten by top-managers and employees, instead, they were intensively used for continuous improvement of production.