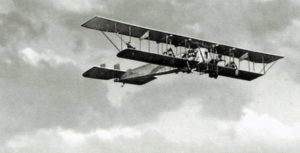 Five best designs by Igor Sikorsky
On April 17, 1941, the American engineer of Russian origin demonstrated the first amphibious helicopter. It was created on the basis of the VS-300 model, fitted with floats. It was the first helicopter in history to be able to land and take off from the water. Here are some of the best inventions by the genius…

1. Ilya Muromets
Sikorsky was recognized as an architect of large aircraft. His works include the gigantic four-engine biplane ‘Ilya Muromets,’ which was used by the Imperial Russian Air Service at the end of 1913, and later was part of civil aviation until 1923. Its technical specification: the length of the aircraft was 19 m, the wingspan was 31 m, the wing area was 200 sq m, the takeoff weight was 7,000 kg, the aircraft’s useful load was 2,200 kg, endurance was 4.5 hours, its speed was 130 km/h, service ceiling was 3,000 m. The crew included 6-8 people. It was equipped with 5-8 machine guns and could carry 500 kg of bombs with an electric discharge device.
One of the modifications was equipped with a 37mm high-speed ship gun to fight airships. The Ilya Muromets is also famous for the fact that it became the world’s first passenger airplane.

2. A movie star
In 1918, Sikorsky immigrated to the United States. And in 1923, he finally decided to create his own company ‒ the Sikorsky Aero Engineering Corporation. Composer Sergei Rachmaninoff became vice-president. He invested $5,000 in his countryman’s venture. The first U.S.-built aircraft by Sikorsky was the S-29, one of the first twin-engine aircraft in America. The aircraft turned to be a success.
The plane was advantageously sold to an American entrepreneur who, without damages and repairs, exploited it, carrying out charter flights, transporting goods and passengers. And in 1928, the plane was bought by an eccentric millionaire, Howard Hughes, for a film, titled ‘Hell’s Angels’ about World War I pilots.

3. A flying boat
In the late 1920s, hydroplanes, or flying boats, as they were then called, became popular in the world’s aviation. Sikorsky produced several such aircraft with excellent operational characteristics. The best creation in this class was the S-44, a four-engine flying boat, which is a logical continuation of the two previous models, the S-42 and the S-43. It was unveiled in 1939 and quickly began to beat world records. The crew consisted of four people. The aircraft carried 18 passengers in a comfortable cabin.

4. An anti-Hitler helicopter warrior
Helicopters were Sikorsky’s greatest glory. He, in fact, was the inventor of the helicopter. In 1939, Sikorsky created a light helicopter, the VS-300, which was experimental. It was a helicopter fitted with utility floats, in which Sikorsky for the first time in history performed a water landing on April 17, 1941. The S-47 (the other code was HR-4) was the world’s first large-scale mass-produced helicopter. The main advantages of the S-47, which was used by the United States Army Air Forces, were its manufacturability, reliability and handling qualities. It was accepted by the Army in 1942 [It is when the United States became a member of an anti-Hitler coalition created by 26 states at war with Adolf Hitler’s Germany, Italy, Japan, and their allies].
During the testing of the helicopter, six world-class records were set. For example, the helicopter climbed to a height of 3,650 m with one pilot on board.

5. Sikorsky’s swan song
In 1957, Sikorsky retired, transferring management to a hired CEO. But before that he had released his best helicopter, the S-58. And it was not only “his best,” but also the world’s best helicopter of the first generation. It carried out its maiden flight in 1954. Its technical specification: the diameter of the main rotor was 17 m, the diameter of the tail rotor was 2.9 m, the length was 14.3 m, the height was 4.5 m, the maximum takeoff weight was 5,900 kg, the maximum speed was 200 km/h, the range was 500 km. The crew consisted of two persons.
It was equipped with a navigation system, an autopilot, an automatic stabilization system during hovering. The S-58 was designed for the United States Army Air Forces as an anti-submarine warfare helicopter (the first in history), and was equipped with devices for detecting submerged targets. A special helicopter was built for the U.S. president.