KJELL NORDSTROM IN UKRAINE: INSIGHTS AFTER MEETING A BUSINESS THINKER 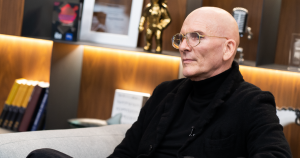 On December 9, Kjell Nordström, a Swedish economist, expert on corporate strategy, business development and globalization, #9 in the global Thinkers50 list 2005, visited Kyiv and the innovation park UNIT.City, developed by the UFuture holding company. After meeting with the thinker, the holding’s top managers shared insights that impressed them the most.

"To change the perception of Ukraine in the world, Nordström said, many success stories are needed. No political alliances, declarations or support will work if there are not enough cool stories about the country. The most important pillar of developed societies, including Nordic countries, today, he added, is trust. If we do not build trust in society, which is the foundation of the financial and legal systems, we should not expect investments or economic growth."

In the future the most developed countries – economically, militarily, technologically – will not necessarily be the happiest. A powerful and technologically developed China could be completely uncomfortable to live in, Nordström explained.

"It doesn't matter what, it matters who. This is my key insight after meeting Kjell. Earlier he used to say "no matter who, the main thing is to do something". Now he says that the role of creative talent in the team was greatly underestimated. The challenge for both business and the country is to attract new people and talents."

named three insights after a conversation with Kjell Nordström:

"One of the ideas that struck me most in Nordström's thoughts was that success had previously been mainly individual effort. Even Nobel Prizes were awarded only to individual scientists. Today we see that in any field, success is a team phenomenon, the result of teamwork. Some scientific breakthrough articles have dozens of authors. Nobel Prizes are usually given to 2-3 people. This is a trend, not an exception. It is also impossible to make a successful project in business alone, you need a high-quality, powerful team," said Viktor Halasiuk, KIEF Supervisory Board member, Ph.D.