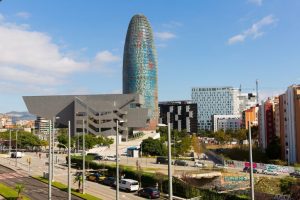 District [email protected] ecosystem: how Barcelona became a center of science and knowledge

The innovative District [email protected] in Barcelona appeared in 2000 on the site of the old dilapidated quarter of San Marti. The local authorities have set themselves the goal of turning the former industrial zone with an area of 200 hectares of cotton-growing land into a centre of knowledge and science. Now there are more than 8,800 companies. 30% of them work in technology and training, providing jobs for 93 thousand people.

Superstars of world architecture were invited to create a horizon of buildings around District [email protected], and the district itself largely contributes to the city’s economic innovations. The success of the project is due to the fact that it brings together technologically advanced companies, universities, training and R&D centers. This creates a unique space for innovation and collaboration between all organizations and ultimately leads to increased productivity.

Every year, Barcelona hosts the Mobile World Congress, the world’s largest exhibition and congress with the participation of telecom operators, mobile content producers and owners of specialized companies from around the world. It’s here that leading mobile companies from around the world bring their latest innovations and it’s here that further ways of development of this industry are determined, large trade agreements take place.

District [email protected] also houses the Barcelona Urban Lab, a public laboratory where manufacturers can test their innovations, such as parking systems and sensors for rubbish bins, which are then successfully integrated into the local environment.

In addition to purely technical data, the system also receives information about the number of inhabitants in each quarter of the city, about taxes, data from social networks. Thus, the system not only forms a complete picture of what is happening at any time but also can make a forecast for the future based on the analysis of already obtained data.

Barcelona, ​​among other things, is also known as a city with a large number of “smart homes” that make life easier for citizens and help save. Spanish operators offer IT solutions that allow you to customize a private or office building for yourself. For example, put a timer on the air conditioner so that it turns itself on 15 minutes before your arrival. Or activate motion sensors that will turn off the electricity in a room that is empty for more than 5 minutes. And choose the optimal level of lighting and adjust the blinds so that they open and close as needed.

You can focus the system on the weather forecast from the meteorological service, and then, for example, during the rain, the function of watering the garden will automatically turn off, and in strong winds will automatically raise the canopy. The systems can work even autonomously when the electricity is off, and it is possible to control them via the Internet.