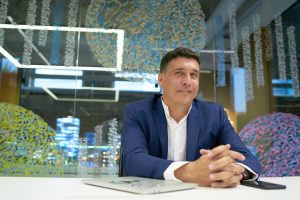 Dominique Piotet, CEO of UNIT.City Innovation Park will run an additional project — the accelerator hub Sector X. Founder and former CEO of the hub Andriy Komarovsky sold his stake to Dominique and is going to the United States to launch new projects. Now the head of the innovation park has already taken the position of SEO Sector X, gets acquainted with the team and is ready for new victories.

“My role will be to strengthen the UNIT.City’s ecosystem. For early-stage startups, the innovation park has created the best conditions for development in program NEST. In Sector X, which is a short time became the leader in acceleration in Ukraine, startups scale, attract investments and launch pilot projects together with large corporations. I am glad that this evolution is taking place within one ecosystem of UNIT.City, the largest in Eastern Europe,” Dominique Piotet said.

Andriy Komarovsky is supporting this direction and will remain the mentor of acceleration hub Sector X for at least one year.

“We’ve created a really interesting acceleration format and became the largest startup hub in the country. But this is actually just the beginning. My team is great, guys love what they do and, what is more important, see a lot of sense in it, and therefore success is inevitable,” Andriy Komarovsky said.