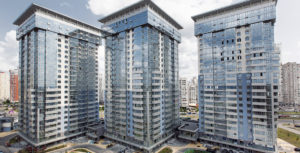 The trusted real estate news portal abcnews has signed the Five Stars award to UDP’s residential complex RiverStone on the Dnipro embankment for its complex approach. The RiverStone scored 45 points out of the possible 50, proving that despite its positioning as a business-class facility, it is a premium one in many respects.

DEVELOPERS’ RELIABILITY AND AVAILABILITY OF DOCUMENTS FOR THE FACILITY: 9 POINTS

The project involves two companies: UDP as a property developer and Miskzhytlobud, which combines the positions of a developer and a general contractor. UDP was founded in 2002; since then, it has implemented 11 residential projects (part of the projects are already completed, some are ongoing) and commercial real estate. Miskzhytlobud has been operating on the market since 1998. Prior to participation in the construction of the RiverStone, it had built two residential complexes. Both companies enjoy a good reputation on the market.

The website of the project has all permit documents posted in a special section along with photocopies of documents on putting already built facilities, commercial and office premises and parking lots into operation.

LOCATION OF THE COMPLEX: 6 POINTS

The residential complex is located on the left bank of the Dnipro River in Kyiv. The Osokorky residential area where the complex is being built has two features: the presence of a large private sector on both sides of Bazhana Avenue (it could be seen from the windows of the RiverStone buildings) and a large number of new buildings. Residents of the private sector include quite wealthy people (in big houses) and those who have modest Soviet-era dachas. New buildings are also split, offering both economy and premium-class housing. Therefore, it is difficult to talk about the homogeneity of the surrounding buildings.

Therefore, it is not surprising that often Kyiv’s Darnytsky district occupies tops police reports in such categories as the total number of crimes, including apartment burglaries, car thefts and pickpocketing.

But this is one of the few negative factors, which, however, are offset by the residential complex’s gated community. The advantages include the location of the complex in an environmentally friendly area on the bank of the Dnipro River’s bay and panoramic views from most of the windows of its buildings. If the buildings of the first phase have windows that overlook the windows of the building opposite, then new buildings are designed the way that virtually all of the apartments have a panoramic view of the Dnipro. It is the view from the window that has the strongest impact on the price of an apartment: the difference in prices in apartments with and without views may be about 30%.

The residential complex is moderately (700 m) away from the important automobile artery ‒Bazhana Avenue, which is a link between the center of Kyiv and Boryspil Airport.

Apartments of the residential complex are sold in standard developer form: with high-quality cement screed laid on the floor, gypsum plaster on the walls and ceiling, that is, with just enough so new owners can put coating finish on the walls before pasting wallpapers or painting.

Cold and hot water is available at the apartments.

Heat and water meters are set in the shared corridors.

Electrical wiring in the latest buildings is laid to the entrance to an apartment. In the first buildings, it was laid inside apartments, but market demand changed the developer’s approach to this issue (each buyer prefers to build his or her own system inside the apartment).

Also, the fire alarm system and the hydrant are installed. On the facades, there are boxes for external units of air conditioners.

The developer uses high-quality materials, and this is visible to the naked eye. Monolithic frames are used as the main construction technology. The walls are built from ceramic and silicate bricks. The facades are insulated with mineral wool, it is 140mm thick in the already built houses, and it is 150mm thick in a building that is currently under construction. The height of the ceiling is three meters.

The windows are mainly made of aluminum, only a small portion of them are made of reinforced plastic. The size of the windows increases depending on the height of the floor, but most of them can safely be called panoramic. Windows starting from the floor is a feature of the seventh house.

The area of the apartments is quite in line with requirements of business class housing. Even despite market trends of reducing the size of apartments, the developer decided not to shrink their area, because the buyers of housing in this residential complex are not very interested in small-sized flats. So, the area of a one-bedroom apartment is an average of 50-70 sq m.

The specific feature of this residential complex is a frequent desire by buyers to merge apartments. As a result, the total number of apartments in the building may be 10-20% lower than the originally planned. The developer takes this feature into account, trying to build the least number of internal walls and partitions, so that buyers can easily redesign any apartment.

Each apartment has space at least for one wardrobe room. One-room apartments have one bathroom, two-room ones have at least two bathrooms.

INTERNAL INFRASTRUCTURE AND SAFETY OF THE BUILDING: 10 POINTS

The territory of the RiverStone residential complex is closed and protected. Inside, one can only get with an electronic key or at the invitation of the owner of an apartment. The area has ready infrastructure: there are children’s and sports grounds, places for walking dogs, for jogging and even their own green square.

The residential complex has three underground parking lots, one of which is reachable from three buildings by elevator. There is even a car wash facility in this parking.

Cars cannot be parked in the inner side of the residential complex. There are parking lots for guests around the perimeter of the complex. Visitors to the Bad Boy alcohol supermarket and the Dog sports club have a separate parking space.

Each floor has from six to nine apartments (depending on the house and the number of apartment blocks). They are serviced by four elevators: the cargo one works exclusively for lifting building materials and workers, who make repairs in apartments, three more elevators ‒ one elevator for both freight and passengers and two for passengers only ‒ serve residents only.

There are several restaurants, cafes, a delicatessen store, a pharmacy, a bank branch, a notary’s office, travel agencies, beauty salons, medical institutions, grocery stores, a fitness center and the large Bad Boy alcohol store on the territory of the residential complex. Also, there is a kindergarten on the ground floor of one of the buildings. In the near future, the developer will start building a private school with two parallel classes.

Around the residential complex, there are about ten supermarkets, Novus is among them. In addition, there are Silpo and Appetite, which includes Winetime. The Osokorky metro station can be reached in 7-10 minutes. There are also many public transport routes along Bazhana Avenue and the Dnipro embankment.

There are three medical facilities in the nearby area, including the Dobrobut Clinic. The surrounding infrastructure also includes several pharmacies, beauty salons, bank branches, dental offices, cafes and restaurants. Not far away there are several car dealerships and refueling, special infrastructure bonuses include the Kyiv city cruiser yacht club and a drive-in cinema.

Thus, the examination of the construction project allows us to conclude that under all parameters, the RiverStone complex corresponds to the declared business class, with some buildings even reaching the premium class. The location of the complex is both a weak and strong spot: the builder was able to turn the less prestigious left bank into an advantage by offering a panoramic view on the right bank at most apartments and paying particular attention to inner infrastructure and the quality of construction.