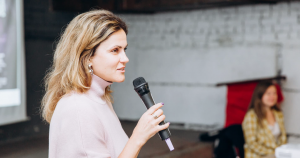 Any company grows at an average rate of new thoughts of its employees. If employees do not bring new ideas, the company will not grow on the energy of the owner alone. Olena Dobrorodneva, Director of Organizational Development at UFuture, Vice President at K.FUND and leader of the European Design Upgrade project, said during the lecture at the KIEF Academy.

How to develop creative potential in a team? Here are just a few tools:

"Strategic sessions is when the team meets, reports, and announces plans for the future. Anti-sessions – when colleagues share their own thoughts on why these plans may not be implemented. This tool encourages the search for new unusual solutions. In the end, if we do not ask the opinion of those who could add a fresh perspective to the usual processes, we lose some of the potential of our people," explained Olena Dobrorodneva.

Human thinking is usually divided into structured and unstructured. Working with the latter is a very strong tool for unlocking our potential. When we work with the rational part of the brain, we are very exhausted often, said Olena. Therefore, to reboot, you need to switch to irrational thinking from time to time. This is the power and meaning of art, creativity and everything that can be attributed to ‘non-utilitarian’ creation.

Also adaptability is becoming an important, if not key, skill for success in the modern world. In addition to IQ tests, international companies are introducing AQ tests when hiring. AQ is the ability to adjust, adapt, accept the new and abandon the old. Today, even startup teams are tested on AQ to decide whether to give them money.

So the key factors for success now are:

“A couple of years ago, we at UFuture felt the need for change. We had a great team, the work was coordinated, but some processes were freezed. We could not launch new projects with the resources we had. We felt that we needed new people, new energy,” said Olena Dobrorodneva.

There are many talented and smart people in Ukraine who adequately evaluate themselves. There is an interest in change and an understanding of the business logic of these changes. There is a desire to create a Ukrainian product and be proud of it. There is a readiness to move from the corporate segment to entrepreneurship. There are many entrepreneurs who want to grow and try partnerships for that. But how to find them?

"For some time we have been trying to find such teams at the market. But the progress was small. That's why we launched the UFuture Talents project. We received 200 applications, of which 26 participants were selected. They were innovation-oriented, positive, and ready to change people. As part of UFuture Talents, they trained with MIM and the Deloitte Academy, pitched their business projects. Their training was monitored by partners and CEOs of our companies," added UFuture's Director of Organizational Development.

As a result, 12 of the 26 project participants joined the holding. Moreover, those who went alone did not stay in the company for long. And those who came as a team, created new projects within the holding. That is how INDAX and Win Win Club teams appeared. When people come in as a team, it is easier for them to hold on and keep the energy and drive they brought with them, Olena explained.

But the most important thing that UFuture got from this program – the old team rebooted too. New people started implementing new projects at a high pace, so the rest had to decide: either start moving forward and catch up with newcomers, or stay behind. In the end, the initiative was very positive. Now our company has talents – all are open, energetic, prone to the development of colleagues.

On February 25, 2022, the KIEF Academy, an educational project of the Kyiv International Economic Forum supported by UFuture, will launch the second stage of the Leadership for Economic Development program. What is waiting for students? Philosophy, economics, networking and tools for unlocking the economic potential of companies, cities and countries.

The training will consist of 8 modules:

Documents are accepted till February 7, 2022. To apply follow the link.