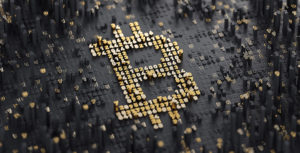 SAN FRANCISCO — When Bitcoin first entered the public consciousness a few years back, a handful of large companies like Dell and Expedia announced that they would begin accepting the virtual currency. But there weren’t many takers.

This failure hasn’t bothered many of the people buying up Bitcoins in recent months, pushing the price to new highs — above $13,000 for one Bitcoin on Wednesday.

These investors aren’t using their tokens to buy computers or to book trips. Instead, they are hoarding Bitcoins as if it were virtual gold, a new way to store money outside the control of any government or company.

“I’ve always been skeptical of directly competing with and replacing existing forms of payment,” said Steve Lee, a longtime Google employee from San Francisco who is investing in virtual currencies. “Today what Bitcoin is excellent at, and has mostly solved, is being your own bank.”

The argument about what Bitcoin does well and not so well can seem like a semantic debate for computer nerds, with little relevance to the outside world.

But disagreements within the Bitcoin community are being watched closely by central bankers and financial industry executives. The titans of finance are monitoring Bitcoin’s successes and failures as they experiment with its technological concepts, like the ledger for recording virtual currency transactions, known as the blockchain.

Many large institutions have said they hope to integrate blockchain technology into their designs for the world’s future financial infrastructure, and those designs are likely to be influenced by what is learned from Bitcoin.

“People are looking at this in part because they see the beginnings of a new financial system — a financial system that has a very different structure than the one we have right now,” said Neha Narula, the director of the Digital Currency Initiative at the Massachusetts Institute of Technology.

Mr. Lee and others hope Bitcoin can be used for payments someday, but he thinks that will most likely come from software that is built on top of Bitcoin, not the Bitcoin network itself.

Not everyone agrees with Mr. Lee’s position. Many entrepreneurs and academics think virtual currencies will gain traction only if they are easy and cheap to send around. The disagreement has given rise to a host of Bitcoin competitors — including a separate virtual currency known as Bitcoin Cash.

But the community that has developed around the original Bitcoin has increasingly been united around a vision that is focused on its goldlike qualities, rather than its ability to compete with PayPal or Western Union.

“The reason people own Bitcoin is because it’s a great store of value, possibly the greatest that has ever existed,” said Jimmy Song, a developer who has contributed to the Bitcoin software. “You can send money to Africa in 10 minutes, but that’s not the main reason people buy it.”

When Bitcoin was introduced in 2008, the title of the paper written by its creator, the mysterious Satoshi Nakamoto, called the currency an “electronic cash system.”

The Bitcoin software created a decentralized network of computers that anyone with internet access could join, making it easy to send Bitcoins between addresses. And Bitcoin first gained public notice because of its use as anonymous digital cash on black-market websites like the Silk Road.

But the number of people using Bitcoin to buy things was always small compared with the number of speculators buying it because of its scarcity. This was something the original software behind Bitcoin had also encouraged, by setting a limit of 21 million on the number of Bitcoins that would ever be released.

The increasing value of Bitcoin made it even less attractive as a way to pay for things. Most people don’t want to pay now with a dollar that could be worth twice as much next week.

There are also limits on the Bitcoin system’s capacity. A rule written into the Bitcoin software had established that the network could process only around five transactions per second — compared with the 25,000 transactions handled by Visa each second.

This bottleneck led to a fight between people looking to use Bitcoin for different purposes. Many early followers believed the system could expand to handle more transactions without sacrificing its status as a virtual commodity. This camp proposed a change to the Bitcoin rules that would have doubled the capacity of the system in November.

But Mr. Lee and other investors and programmers worried that quickly expanding the Bitcoin network would threaten Bitcoin’s independence.

“To be a global money, you can’t have one bank or one country controlling the money, or even a handful of countries or banks,” Mr. Lee said. “If decentralization is jeopardized, most things fall apart with Bitcoin.”

Decentralization is a result of Bitcoin’s unusual design, which allows users to keep and monitor the records of every single Bitcoin transaction, without any central authority.

If the number of transactions quickly increased, many Bitcoin aficionados believed, only large companies would be able to keep the records. What’s more, they believed the design of Bitcoin wasn’t well suited to competing with PayPal and Visa, because every transaction has to be recorded on thousands of computers around the world.

“Anyone who looked at Bitcoin and saw ‘cheap payments’ likely doesn’t have much background in computer science,” said Ben Davenport, a co-founder of the virtual currency start-up BitGo and an opponent of doubling the network.

This argument prevailed, and in early November the plan to double the network capacity was called off.

Since then, people interested in using virtual currencies to make payments have looked to Bitcoin competitors. Stephen Pair, the chief executive of Bitpay, a start-up that helps companies take virtual currency payments, said his customers were looking to move beyond Bitcoin.

“If people can’t engage in commerce, it’s hard to imagine why they’d want to store their money in Bitcoin in the first place,” Mr. Pair said.

Mr. Pair believes it is irresponsible to suggest that a virtual currency that has been around for less than a decade could pose a credible challenge to gold. The conceit of Bitcoin as a good place to store money, he added, will be less convincing when the price of Bitcoin goes down, as it has in the past.

One alternative is Bitcoin Cash, which was created in August. The price of Bitcoin Cash has risen over 125 percent since the plan to double the capacity of the original Bitcoin was called off.

But there is no shortage of investors who have voted with their pocketbooks for the more cautious approach of the original Bitcoin.

The price of a Bitcoin has jumped 70 percent over the past month, to more than 10 times the price of an ounce of gold.

“I don’t think most people treat Bitcoin as something to buy because it’ll get feature X, Y and Z in the future,” Mr. Song said. “Mostly, people are investing because they believe it to be a good store of value.”