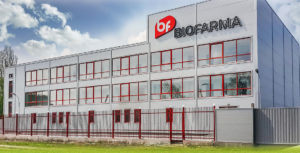 “In December, we will receive separators from the German company GEA Westfalia, in February – the bioreactor of the Italian company Olsen, chromatographic complexes and ultrafiltration units from the world’s leading companies such as General Electric, the Marchesini bottling line and in July we are opening a modern fractionator plant,” he said

The projected capacity of the fractionator, in the construction of which $ 35 million was invested, will amount to 500 tonnes of blood plasma.

“We have a clear goal and plan to become the world’s leader in deliveries to the market. We have the ambition of being among the seven largest global producers of blood plasma,” Yefymenko said

Biofarma is among the ten largest Ukrainian manufacturers of medical products. It produces more than 20 immunobiological drugs from donor blood.