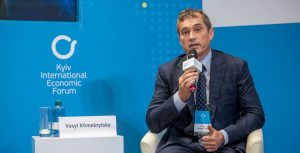 Vasyl Khmelnytsky: SMEs should become the basis for economic growth in Ukraine

Ukraine has a high chance of joining the leaders in technological industries, as the country already ranks 43rd among the most innovative countries and is rapidly moving forward due to young talent. Founder of the UFuture Investment Group Vasyl Khmelnytsky announced this at the Kyiv International Economic Forum. The entrepreneur said that creating attractive conditions for the development of domestic small- and medium-sized enterprises (SMEs) should be among priority tasks. After all, due to the development of technologies, large corporations will lay employees off, while the SME sector can compensate for these losses by creating millions of new jobs.

“If we continue giving priority to new technologies, if we create an investment climate for Ukrainian businesses and support small- and medium-sized entrepreneurs, we will create the basis for constant and dynamic economic growth,” Khmelnytsky said.

The foreign investor evaluates the investment attractiveness of a country by looking at the behavior of local businesses, he said.

“While communicating with the guests of the forum, I came to a very pleasant conclusion: we are no longer seen as a country with a cheap labor force. Step by step, we’re becoming the source of talent and intelligence that the world is lacking. The next step is a qualitative improvement in the investment climate,” Khmelnytsky emphasized.

For his part, Ukrainian Prime Minister Volodymyr Groysman stated that in the past four years, the authorities have done a lot to create a high-quality business climate. “Over the past year, we changed national legislation in various fields, starting from the most modern legislation that opens the way for the privatization of the public sector, which currently needs new technologies, new proposals, and should be honest, and ending with the various regulations that influence the quality of doing business,” the prime minister said.