UNIT.City is on the list of the 30 best construction projects in independent Ukraine 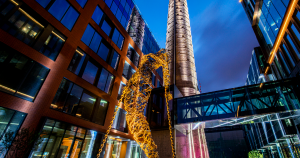 With independence, Ukraine’s economy, political life, and culture developed in their own way. Architecture is no exception. On the occasion of the 30th anniversary of independence, UNIAN journalists compiled a list of the 30 most interesting construction projects that were built in Ukraine after 1991 or received a second life due to a comprehensive reconstruction. The most important thing is those that attract attention.

“In 2017, the innovation park UNIT.City appeared on the territory of the former Kyiv Motorcycle Plant. The whole complex is designed as Kyiv's "Silicon Valley" — a place where you can comfortably live, work, study, and relax. There are already campuses for resident companies, cafes, schools, gyms, and more. Also planned is a residential part of UNIT.Home, a medical center, a park, a stadium, bicycle paths, shops, restaurants,” the journalists noted.

UNIT.City was included in the list of the best buildings of independent Ukraine in the category “Housing and offices”. Journalists also singled out the best architectural projects in the categories of “Education, Education, and Public Services”, “Sports and Religion”, “Restaurants and Hotels”, “Culture and Tourism”. Among them projects from the Kyiv cycle track to the Church of the Nativity of the Blessed Virgin in Lviv and the CNAP in Poltava.

The full list of the 30 best buildings of independent Ukraine can be found via the link.