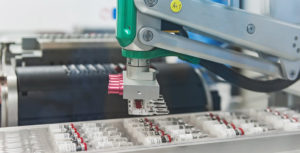 In 2015, Biofarma, the CIS’s only producer of preparations on the basis of plasma of human donor blood, injected investment in the reconstruction of the Sumy Regional Blood Center. Nowadays, it is the most modern blood center in Ukraine, which accounts for 98.2% of donor blood and its components in the region.

Director of the Sumy Regional Blood Center Natalia Trofimenko told participants in a round table meeting of the Ukrainian Health Ministry on “State Regulations of Production and Circulation of Components and Preparations from Donor Blood in Ukraine” how to provide the region with high-quality blood products. The report delivered by the Director of the Sumy Regional Blood Center ended with applause from those present, as the center’s performance demonstrates that it is realistic to create brand-new donor blood services in Ukraine, which will work in accordance with international standards and provide the population with high-quality components of blood.

The reform of the blood donation system in Ukraine is long overdue. Medical institutions are not provided with blood-based products to the needed extend while a significant part of blood components is not used and disposed of. The donor blood centers and blood transfusion stations that are funded by the state and municipal authorities lack modern equipment, reagents for donors’ screening and platelet separation systems. Therefore, there is a problem of non-compliance with international standards for blood donation, processing and testing for donated blood.

“All these problems need to be addressed systematically, solved and regulated at the state level. But it does not mean that now blood services could sit back and wait. They can change and work on their own. A striking example is the Blood Service Center in Sumy region. They have gone for public-private partnership. And this has yielded its results: now they are the most up-to-date regional blood center possessing the most advanced equipment and being able to pass any test in line with international standards. They are ready to share their assets and experiences. They have got something to learn from.” said Deputy Minister Roman Ilyk

In turn, Director General of Biofarma Kostiantyn Yefimenko said, “Biofarma has invested significant funds in modernizing the Sumy Regional Blood Center. Thanks to this, the most up-to-date center with the highest level of safety for donors and recipients operates in Sumy now. My dream is to open similar high-tech blood centers in every regional center of Ukraine.”