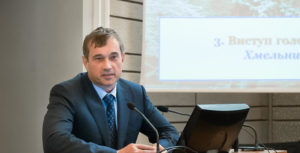 UFuture Investment Group (UIG) is mulling the possibility of opening an innovation park in Kharkiv, the founder of the group, Vasyl Khmelnytsky, said on the sidelines of the Ukraine House in Davos on Wednesday.

He did not confirm earlier announced information that the group planned to build innovation hubs abroad.

“I never promise things that I cannot make for sure. We plan to finish the first stage of Unit.City in Kyiv. It’s around 30,000-35,000 square meters. Then we will see,” he said

The businessman confirmed the interest of potential foreign partners.

The park in Kharkiv could become a third one in the group’s portfolio after Unit.City in Kyiv and Lvivtech.City in Lviv.

Khmelnytsky develops various businesses, giving preference to cooperation and co-management. Among the most famous projects are the renovation of Kyiv International Airport (Zhuliany), the construction of the Ocean Plaza shopping and mall and residential complexes Novopecherski Lypki, Boulevard of Fountains, RiverStone and Parkove Misto in Kyiv. He invests in such business assets as UDP Renewables (alternative energy), Biofarma (pharmaceutical industry) and RTM (national advertising operator). Support for social projects in the field of economics and education is provided by Vasyl Khmelnytsky’s K.Fund.