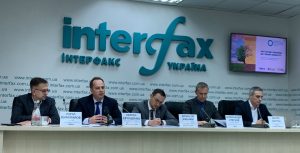 “The Ukrainians are ready to act to improve the climate but are not ready to pay for it,” — Serhiy Yevtushenko, UDP Renewables

The Ukrainians care about climate change, but are not ready to take full responsibility for this process. This is proved by the results of the survey that was conducted by the Kyiv International Economic Forum together with the Center for Public Opinion Research “Socis” with the support of the investment and development company, UDP Renewables, and Bohush Communications agency.

Researchers note that compared to the previous 2014 survey, the relevance of environmental issues in the minds of the Ukrainians has increased significantly — 73.2% of those polled declare their willingness to act to improve the environment.

According to the analytical report, on November 12, 2019, a press conference “Are Ukrainians Ready for the Climate Change?” was held during Kyiv International Economic Forum.

The speakers named the main environmental problems in Ukraine:

To improve the situation, 76.8% of respondents believe that such actions should be financed by the state, and 60.4% — that the government should initiate environmental policy in the state. 17.4% of the Ukrainians are loyal to the implementation of environmental and nature-saving policy by the state, more than half of the population is dissatisfied with the government’s actions.

More than a third of the Ukrainians are ready to improve the environment on their own — 64.9% supported the cleaning of the territory of their homes, 61.9% — restriction of electricity use, and 53.8% — water. More than half of the Ukrainians are ready to replace traditional lighting with energy-efficient one, and only 7% of those polled use alternative energy sources.

The Ukrainians aren’t ready to pay for the preservation of the environment, but they are ready to take a number of environmental actions on their own: 89.4% refuse disposable plastic, but only 32.2% of the Ukrainians agree to pay 200 UAH/month for recycling of household waste.

67.2% of those polled see value in the consumption of energy produced by clean technology and they are ready to pay more for it. 26.4% of respondents don’t want to abandon coal, natural gas, oil, fuel oil, gasoline. And 4.8% generally oppose the development of renewable energy in Ukraine.

The results of the study are an analytical report comparing data from 2014 and 2017 with the support of the Global Environment Facility in the framework of the implementation of the United Nations Development Program “Integrating the provisions of the Rio Convention into Ukraine’s national policies”.