The key to economic growth: Forum of Innovative Productions held in Bila Tserkva 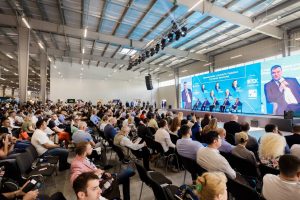 On June 17, 2021, a vibrant meeting of Ukrainian manufacturers – the second Forum of Innovative Productions – took place in the Bila Tserkva Industrial Park, the majority shareholder of which is the UFuture holding company. The event was organized by the Kyiv International Economic Forum. About 1,000 representatives of Ukraine’s manufacturing sector discussed the current state of affairs in the Ukrainian industry. There were 7-panel discussions, during which 30 speakers from among the top Ukrainian manufacturers, government officials, financiers, and innovators spoke.

The meeting began with an introductory speech by the founder of the UFuture holding company Vasyl Khmelnytsky. Despite popular talkings about the benefits and commitment of developed countries to the ideas of the free market, the speaker said, free business conditions in the world, in fact, do not exist. Donald Trump and Joe Biden, former and current presidents of the United States, despite all their differences and contradictions, unanimously emphasized the need to return production facilities to America and create jobs.

“Production is the key to the economic growth of any country,” such a key thesis Vasyl Khmelnytsky emphasized on.

One person opens a factory in Ukraine, others come to work for him or her; they receive a salary and spend it on various services, restaurants, and hairdressers, thus giving the opportunity to develop small and medium-sized businesses – this is how the country’s economy works and develops.

During the first discussion panel, Ukraine’s industrial strategy was discussed with the participation of top Ukrainian entrepreneurs, representatives of the government sector, and the expert community. The panel was moderated by Nicholas Tymoshchuk, CEO of UFuture holding company.

At the beginning of this year, the government approved the National Economic Strategy 2030, which has become a discussion theme among entrepreneurs since then. Speakers talked about the possible positive impact of the document. It is good that the strategy has finally been developed, that the government began to look closely at the industry, and the most important now – to start implementing it as soon as possible, experts said.

“The long absence of industrial policy in Ukraine has led to the situation of deindustrialization, in fact. We are now at a new stage: the authorities have decided to establish a Ministry of Strategic Industries, and this shows the real prerogatives of the President and the Government. I am deeply convinced that industry is the driving force behind Ukraine’s economic development,” said Oleh Urusky, Vice Prime Minister of Ukraine, Minister for Strategic Industries of Ukraine.

Speakers stressed on the need to develop such industrial parks as “Bila Tserkva”, which created all the necessary conditions for rapid expansion of production, intensification of the Export Credit Agency, which should facilitate the entry of Ukrainian products into international markets, creating various stimulus for producers, including tax.

“We are well aware of such tax functions as fiscal and regulatory, but for some reason we forget about stimulation,” said Anatolii Amelin, a well-known Ukrainian economist and director of economic programs at the Ukrainian Institute of the Future.

During the Forum, a memorandum of cooperation was signed between the public concern Ukroboronprom and the Innovation Development Fund (Ukrainian Foundation for Startups) to revive the introduction of new technologies in the defense industry of Ukraine.

The Forum’s exposition featured products from various Ukrainian manufacturers, including modern Plank Electrotechnic electrical installation systems, Virastar altitude access equipment, Sherp ATVs, DroneUA drones, electric vehicles of the Lviv concern Electron and many others. In the break between the discussion panels for the participants of the event, the world champion in aerobatics, Ukrainian Dmytro Pohrebytskyi, showed a fascinating air show in the sky over the industrial park.

During the Forum they also talked about investments in production: prospects, conditions, risks.

“We live in capitalism where money determines if not everything, then a lot. Therefore, it is important to talk about money in the industry, about attracting money to industry, the specifics and risks associated with it; on international and Ukrainian contexts for raising capital,” said Kirill Bondar, partner and CFO of UNIT.City innovation park.

The Forum ended with a discussion of business strategies in the new economy. The panel’s moderator, CEO of Advanter Group Andriy Dligach, noted that in today’s fast-paced world, many companies are abandoning the development of strategies, or use only short-term ones – the future is too vague. However, speakers and top managers of leading Ukrainian companies did not agree with this statement.

“When you reach a certain level, without a strategy it is simply impossible to work. Biopharma has developed and approved a 5-year strategy for the Board of Directors (two of which are foreigners from the top companies in the industry, from the United States and Switzerland). We do financial planning for 3 years. The strategy answers, first of all, the question of what we want and what needs we solve. For example, Biopharma plans to process 1 million liters of blood plasma by 2025. This will help to reach EBITDA of $90-100 million. So it is necessary to build 30 plasma centers. The strategy answers the question of when and what stage of plant construction should be launched, who will build plasma centers, buy plasmapheresis devices, etc.” Kostiantyn Yefymenko, president of the Biopharma immunobiological and pharmaceutical company.

Vasyl Khmelnytsky, the founder of the UFuture holding company, noted that books such as ‘strategy does not work’, “financial plan does not work”, in fact, fashionable books for those who are not in business.

“If you are a businessman, you definitely need to have a strategy. Of course, it can change, but I certainly have a plan for where we are about to do, who our competitors are, what we will do in a month or two. Moreover, all employees know my strategy. We never hire third-party companies to develop a strategy for us, especially Western companies that do not know the local mentality and culture. The strategy works when the founder, management, and, possibly, several involved Western specialists take part in its development,” he concluded.