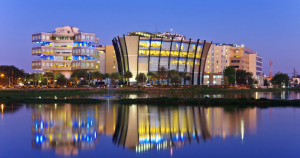 Everything seems to be mixed in this city. Pictures from Indian Bengaluru, or Bangalore as it was once called by the British colonizers, first show majestic Hindu temples. There are more than fifty of them in the city – not only Hindu.

Locals complain of constant traffic jams. However, slowly riding through, you can enjoy the scenery with impressive technology parks, luxury hotels, and fine restaurants – it is truly a global innovation and technology center.

At the same time, 10% of the population of Bengaluru lives in the slums. The rate is “low” compared to neighboring Mumbai, where it reaches 50%…

In 2015, Statista ranked Bengaluru first in the world in terms of the income gap between rich and poor: the wealth of billionaires 646,407 times that of the average per capita GDP.

However, Bengaluru was named by the analysts of the British data platform Dealroom.co at the beginning of the year as the fastest-growing technology center in the world. During 2016-2020, the value of venture capital invested in local technology companies increased fivefold.

The seeds for India’s technology boom were sown back in the 1970s when the government decided that technology could be a key factor in the development of the national economy. In 1984, Indira Gandhi’s cabinet approved a program to develop and promote software exports from India – i.e. outsourcing – that gave impetus to the Indian IT revolution.

The technology industry does not require much investment while raising the level of education of the population and providing jobs.

In 1985, the American technology corporation Texas Instruments became a pioneer and located a branch in Bengaluru. Others came after. Today in the technology capital of India Amazon, IBM, Microsoft, Tesco, Nokia, Siemens, and many others have their divisions.

Like Mumbai, which the British once called Bombay, Bengaluru is called Bangalore during British rule. In 2014, the city was given back its historic name, but the colonial name is still more common.

Bengaluru is the third-largest city in India with a population of about 12 million people. The city is called the “Indian Silicon Valley”. According to some estimates, more than 10K millionaires and 60K super-rich people live there.

The technology capital of India leads in the number of young billionaires. Most often they are the founders and owners of successful startups.

As of early 2021, there are more than 13K active startups in Bengaluru, 17 of which are unicorns.

Nithin Kamath, 41, who started the financial service Zerodha, is one of those on the list of Bengaluru billionaires. Founded in 2010, Zerodha is now valued at $3 billion and is responsible for 15% of India’s retail market (with a population of 1.3 billion today – ed.).

Sachin and Binny Bansal created the Flipkart marketplace, valued at $28-30 billion. A few years ago, Walmart bought a 77% stake in the company, and never seems to regret it. Today, Flipkart has more than 300 million registered users, offers 150 million items in 80 categories, and has an annual turnover of $15 billion.

India’s most popular taxi service is not Uber, but Ola, another startup from Bengaluru. In addition to transportation, the company delivers food. And also develops and produces electric cars, accumulators, and charging stations for them; develops the infrastructure of electric transport in the country as a whole. In the near future, Ola plans to launch an electric scooter factory on the outskirts of Bengaluru, which will produce one scooter every two seconds. More than 3K robots and 10K people will work at the plant.

Gradually, the technological revolution, with large-scale government support, formed a unique IT infrastructure in the country; with dozens of technopolises, companies, associations, industrial parks, etc. Today, the organization of Indian IT companies includes:

Electronic City, a technopark founded in 1978, operates in Bengaluru. It is one of the largest IT parks in India. Here are the offices of about 200 technology companies and thousands of employees. The development of Electronic City accelerated significantly with the liberalization of the Indian economy in the early 1990s and became an example for similar centers in many cities.

In 1996, together with a Singapore consortium, an ITPL technology park was established near Bengaluru. Technopolis accommodates more than 200 companies, including General Motors, Xerox, Sharp, IBM, Vodafone, Delphi, Huawei etc.

Meanwhile, the city is living its life. Currently, despite the technological success, Bengaluru is India’s record holder in coronavirus incidence. Next to the crowded hospitals, the modern “smart city” Karle Town Center continues to be built according to the project of the famous Dutch architectural firm UNStudio.