Techno insights or as top managers of UNIT.City went to Silicon Valley 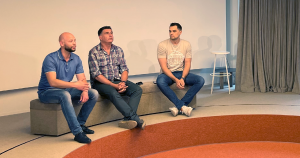 Top managers of the UNIT.City innovation park, developed by the holding company UFuture, recently returned from the United States, where they studied the technological ecosystem of the country in general and Silicon Valley in particular. CEO of UNIT.City Dominique Piotet, managing partner of UNIT.City Constantine Yevtushenko and the CFO and partner Kyrylo Bondar were amazed at how devastated America’s main technology center looked.

“San Francisco looks like a ghost town. Only a week before our arrival here, we were allowed to go to offices, visit shopping malls, etc. People are still very scared. Actually, this is not the San Francisco we are used to, which we have seen before. Many left, both from the city and from Silicon Valley. It seems that the relationship between IT company owners, their CEOs and teams has changed. The former want to return employees to their offices, the latter do not want to leave the good places they moved to during the pandemic,” explained Constantine Yevtushenko.

San Francisco is similar in size to Lviv, continued Dominique Piotet. About 800 thousand people live there. The loss of about 10% of the population is hitting the region’s economy hard.

“One thing must be understood: Silicon Valley grows strongly when everything is good in the world, and falls low — when the world is in crisis. This was the case in 2008 during the financial crisis. Many — people, companies — are leaving the Valley today. But they will definitely be replaced by others,” added the CEO of UNIT.City.

In his opinion, in order to be successful, UNIT.City needs to establish contacts and “build bridges” to other technological ecosystems of the world. Closed ecosystems perish and open ones survive because they have connections with others. One of the world’s strongest IT ecosystems, Israel, has been successful, in part because it has built strong relationships with the United States, Silicon Valley, Europe, and more.

Kyrylo Bondar was amazed at how well the talented Ukrainian developers are aware of Ukraine in the Valley. People there are ready and happy to come to our country; invest in promising startups.

"I was very impressed by the culture of relationships there. If you have a product, have a good reputation, you will be gladly directed in the right direction. After a while, you will be able to find your investor. Probably, the logic is that if someone helped me, I have to help others,” he added.

Silicon Valley is going through difficult times today, Constantine Yevtushenko continued. Under Trump, foreigners were restricted from obtaining visas, under Biden, taxes were raised. However, the money — and there is a lot of it — remains in the Valley. Networking is also in the Valley. Therefore, the restoration of the technological center of America is a matter of time.

“In six months, everyone, including developers, teams, companies, will return to the Valley. In a few years, they will forget that there was a crisis, and even faster, that Trump was once president. This is the power of America. Innovative and powerful companies are aging and leaving the Valley. This applies to both Oracle and HP. They are being replaced by new generations of companies,” added Dominique Piotet.

Meanwhile, there is no one at the Stanford Research Institute (SRI International) — the place where Siri was invented, where, in fact, the Internet was invented — except the president and possibly a security guard.