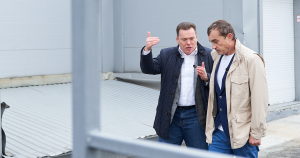 Biopharma, an immunobiological pharmaceutical plant, is served by 45 people per work shift. This is one of the most innovative and technologically advanced productions in Ukraine. Almost all processes are automated here. Biopharma is the only company in Ukraine that develops and manufactures immunobiological drugs from blood plasma, wrote Delo.ua.

"I am an entrepreneur who has gone through an unusual business path. I have many positive examples of companies that I created from scratch and led to success. Biopharma is a specific and very promising business that we have been building for over 10 years. Today, like a rocket, it goes to space, because it is controlled by my partner Kostiantyn Yefymenko. I have been working with him for about 15 years," said Vasyl Khmelnytsky, founder of the UFuture holding company, which is a strategic investor in Biopharma.

All processes are automated at the plant, so the only duty of the staff is to monitor whether the devices are working properly and there are no failures.

"If in 2016, if I was taken to Germany, shown an already operating plant and given money to build the same, I would say ‘no’. We got involved in this project, not fully understanding all the difficulties. But this is how life is arranged: to move to the next level, you need to overcome difficulties," said the president of Biopharma Kostiantyn Yefymenko.

His main advice to young entrepreneurs is figure it all out and do it. If you feel like an entrepreneur, you just have to do it. It is better to regret what has been done than what has not been done, Yefymenko believes.

Vasyl Khmelnytsky agrees with him. In his opinion, he and Yefimenko are successful because of their zeal – despite the fact that the president of Biopharma graduated with honors, and Khmelnytsky in the first year of the institute dropped out and started to work.

"There is a trap for smart people: it is very difficult for them to start a business because they are constantly trying to calculate everything. But in 90% of cases I started businesses without understanding all its specifics, gaining new knowledge, finding partners and correcting mistakes in the process. That's why I think that willingness to do something is the most important thing for an entrepreneur," added Vasyl Khmelnytsky.

In addition to Biopharma’s production facilities, another building is being built: the company’s new laboratory. There will be a modern reception, microbiological, chemical and viral laboratories, as well as R&D laboratory and coworking for biologists and chemists.

Biopharma’s goal is to become one of the top 6 global companies in the next five years. After that the plan is to build a plant on another continent.

Watch the full version of the report from the Biopharma plant on Vasyl Khmelnytsky’s YouTube channel.