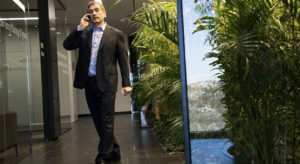 Forbes spent a day with a co-owner of UDP, one of Ukraine’s largest construction companies.

It turned out to be unexpectedly easy to persuade one of the most low-profile Ukrainian businessmen Vasyl Khmelnytsky to spend his working day with Forbes. “You know, after a scandal with Oleksandr Onyshchenko, we are no longer afraid of being recorded,” the businessman replied after we warned him that we would record conversations during the day.

It is obvious the person who ranks 25th in the 100 Richest List (Forbes estimated his capital at $147 million in 2016) wants to leave the impression of being a transparent businessman. During our six-hour interview, we often heard Khmelnytsky saying “We have no secrets”. However, it turned out to be almost impossible to force him to open up to us completely. The businessman would not answer personal questions, having undoubtedly prepared for the meeting. As a result, he remained in control of the situation. From the very start of the conversation, it became clear that the former MP carefully set out the points he wished to disclose, and that it would be extremely difficult to find out anything beyond this.

The multi-millionaire admitted that before 2013 he underestimated the impact of reputation on business. “We just did our job: we built factories, residential complexes. But we noticed that if we did not participate in the process of making news, people could make up absolutely horrible things about us,” the businessman says. By now, a portfolio of entrepreneurs has already been supplemented by several social educational and innovation projects, of which he is keen to talk about. Khmelnytsky chose not to hire any coaches for molding his image or public performance skills. He decided that his experience gained in the Verkhovna Rada for almost 17 years was quite enough.

“At 9:00, we will meet with the general director of UDP, my partner Valeriy Kodytsky. I’d like to discuss with him the issues of development of Novopecherski Lypky residential complex. At 10:00, a meeting with Andriy Brynzyllo on the Bila Tserkva industrial park. At 10:30, a meeting with Rasim Bekmezci, Deputy Chairman of the Ukraine-Turkey Business Council. We will discuss investments in Ukrainian business,” Khmelnytsky says

It seems that the businessman will have held at least six meetings even before his lunch break starts.

The schedule seems to be a bit of a show-off: in a single day he squeezes meetings on all of his high-profile and advanced projects. It is Novopecherski Lypky – the largest business class residential complex in Eastern Europe, a meeting with Energ’East President Quentin Boulanger, who is to consult the businessman on the state of affairs in the field of green energy – this is the field Khmelnytsky plans to develop in the near future. Then the developer promises to show us his UNIT Factory ─ an alternative private university for IT professionals, and the Center for the development of technology companies. Both projects are supervised by his K.Fund, which he created to support projects in the field of education and economics.

Khmelnytsky’s tight schedule even found a spot for a trip to the Novopecherska School, supervised by his wife, Zoya Litvin. We were up for it.  Forbes has already covered each of these projects more than once. In addition, we succeeded in a short time to get acquainted with several top managers of Khmelnytsky’s leading projects.

“I have bad news for future developers. Many people think that once they get a land plot and built a house, they will sell it within a year and make some money. We bought a site for Novopecherski Lypky back in December 2004 and only began to build houses in 2007. See, it’s 2017 now, while we have only built half of what we’ve planned. Valeriy, what do you think, we’ll we finish it in five years or so? You see, this is a long systemic business,” our interlocutor says, interrupting the presentation by UDP general director Valeriy Kodytsky and suggesting we check out the construction site.

Despite the fact that it’s almost 10 degrees below zero outside, Khmelnytsky leaves his office with his coat unbuttoned. “Vasyl Ivanovych, isn’t it too cold outside to not be wearing a hat?” asks Dmytro Zverev, vice president of K.Fund. “I served in the army in Astrakhan region at 52 degrees below zero, can you imagine that?” the developer replies jokingly.

While we are looking at the forthcoming fifth line of Novopecherski Lypky, Khmelnytsky keeps joking around: he shows us in which of the houses he has bought an apartment (claiming he managed to negotiate a small discount) and rejoices at the fact that a swimming pool and spa will be built nearby.

“When we started building, we were reproached over the driveways being too wide. If you build houses denser, there will be more “square meters” available. But we decided that it would be better to sell at a higher price instead,” says Kodetsky, while we are passing past the excavated foundation pit. At this location, an outdoor swimming pool will emerge next year. Asked whether he sees his boss often, UDP general director gets a bit offended: “Khmelnytsky is not my boss, he’s rather a partner and friend for more than a decade.”

The partners came up with an idea to engage in construction business back in 2002 when they decided to look from a different angle at closed down factories and bankrupt enterprises. Their first asset was an agro-firm called Troyanda, where now a residential complex Park City stands. Novopecherski Lypky emerged on a land plot leased from the Ministry of Defense. The designer was BIP-PM, created instead of the Bureau of Investment Projects of the Ministry’s Central Design Institute.

Besides Kodetsky, Vasyl Khmelnytsky has more than 50 partners. “I have three partners in the pharmaceutical business, two – in Star Media, and another five in UDP,” Khmelnytsky says. But the businessman calls out only the names that are well known and have been covered by media outlets together with him: it’s Andriy Ivanov, Denys Kostrzhevsky, and Ihor Nikonov.

A partner can only join the project at the stage of its launch. This can be read in virtually every article where the developer mentions his business rules. He also repeats this commandment in his interview with Forbes. If his business is already successful, instead of attracting partners, Khmelnytsky appoints hired managers. There are two ways: it’s to share financial risks or to impress Khmelnytsky with their managerial qualities. “I have to feel that I would be sorry to lose such an employee, so I will make them my partner,” explains the businessman.

Every other meeting this day started with a little delay due to Forbes’s fault. In less than three hours, we are able to change three locations: Novopecherski Lypky’s office on Drahomirova Street, the IQ Business Center at Bolsunovski Street, and UNIT Factory on Simyi Khokhlovyh Street. The schedule is so tight that it is virtually impossible to stay a little longer to make some good shots of the scene. Every time a Forbes photojournalist asks Khmelnytsky to have another minute for a photo shoot, one can see that the entrepreneur feels uncomfortable.

“I hate to be late. But it’s OK when someone else is late for a meeting with me, especially top managers. Then my interlocutors feel a bit guilty and may be more talkative.” – explains Khmelnytsky

All three offices are designed in the same style: plenty of greenery, light, and large windows. Walls between the offices are almost always transparent. Shelves are full of books on management or biographies of legendary businessmen. Some of them have been published by the Khmelnytsky Fund.

Khmelnytsky’s colleagues tell us that he is fascinated by studying different approaches to management. He is proud that the structure of the organization in his projects differs from that in most companies in the Ukrainian market. Usually, managers prefer the pyramid structure: everyone is waiting for the orders from their boss and are afraid to take a single step without his knowledge. “90% of decisions in my companies are made without my participation. I don’t even get reports on a lot of issues. When employees find solutions themselves, it makes them stronger,” says Khmelnytsky. And he immediately adds that this is why he has a lot of spare time.

By the way, his spare time the businessman spends quite rationally. He does not consume alcohol and tries not to eat late, so he does not appoint meetings in the evenings. He can invite friends or business partners for a tennis game, though. When he wants to spend time by himself, he jogs.

While on vacation, Khmelnytsky prefers not to remain under pressure. “I’m not a big fan of running around museums for 10 days without stopping. I get very tired at work, so sometimes it’s just a good luck I have an opportunity to lie on the beach,” he explains. He says he is trying to get out on short trips because he becomes tired of vacationing after a week.

Instead of holding big meetings, the businessman prefers to have tête-à-tête encounters, which rarely last longer than 30 minutes. “I have long realized that if my interlocutor can’t formulate their main idea within 15 minutes, then it’s not worth to continue such conversation,” Khmelnytsky says, voicing another business rule. At the launch stage, the businessman is ready to give a long-term project several hours a day. But when the management company has been established and fully staffed, he believes it is sufficient to hold just one or two meetings per quarter.

If Khmelnytsky comes to a shareholders’ meeting once a year, it is a sure sign that the project is successful. “I am looking for new niches, I create a company, I launch it and then release – this is the essence of my business,” explains Khmelnytsky. Today, his most important undertaking the businessman calls his UNIT Factory ─ the IT-based university operating under the French system School 42 (the university which is open around the clock, where the learning process is not graded, and students are immediately engaged in working on projects that are getting more complex throughout the learning process).

“Ten years ago we would just built apartments and sell them. Now we create services: our apartment complexes have shops, gyms. But if it’s already not enough, we need to build an environment. In addition to housing and infrastructure, we create jobs. UNIT Factory is precisely the right project for this. It will become very successful if the state does not interfere.” – Khmelnytsky says

At the same time, Khmelnytsky, who is a qualified welder, says: he has no clue about programming. “I am a professional manager, I can manage both an institute and a spacecraft construction,” he says. The businessman sees his task in searching for competent managers and creating conditions for them so that they have an incentive to work. In his opinion, the best incentives are comfortable working conditions, broad powers, bonuses and, of course, control.