Sophia Antipolis: how France build a technology park in the Riviera 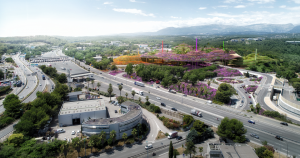 In 1969, the United States landed a man on the moon for the first time, engineers from the Universities of California and Stanford sent each other a message on the Arpanet marking the advent of the Internet, and France founded the oldest technology park in Europe, Sophia Antipolis.

Sophia Antipolis is considered to be not only the oldest but also one of the largest technoparks in Europe:

The unusual name of the park can be easily explained: “Sophia” is the name of French Senator Pierre Laffitte’s wife, he was the founder of the park; “Antipolis” is the ancient Greek name of the nearby French city of Antibes.

Antibes is a resort city in the French Riviera, the second-largest city in the region after Nice and the biggest yacht port here.

Who would have dared to build a technology park in the centre of the popular resort? Cote d’Azur seems like a dream for a tired top manager who is going to retire, not for a young inventor.

Sophia Antipolis thus was purely an initiative of the French authorities. Looking at the heyday of technology centers in the world, like the Silicon Valley, which at that time was developing for twenty years already, the French authorities realized that they needed to catch up. And they turned for help to the Americans.

In the early 1990s, American corporations IBM and Texas Instruments helped to develop Sophia Antipolis: opened their R&D centres here and helped to attract other 70 IT companies. Research institutions such as Eurecom and Telecom Paris joined the technopark too. As well as the European Telecommunications Standards Institute, famous for their GSM standard for mobile phones.

However, there were some “failures”. In the 1980s, Sofia Antipolis was home to the well-known American minicomputer manufacturer Digital Equipment Corporation: when minicomputers were replaced by PCs, the company became part of Compaq, and Sophia Antipolis lost an important tenant.

The story of Sophia Antipolis is a story about the slow development of a technology park. It is not a day or a year one needs to build something like this. The oldest tech field in Europe at the beginning was heavily dependent on investment. Authorities attracted residents with lower real estate prices – lower than in Marseille or Lyon. And it is a super-popular tourist region.

In the mid-1990s, Sophia Antipolis began to generate its own successful startups. For example, a search engine for e-commerce Certimate and a tool for video content Castify were created here.

The European headquarters of the World Wide Web Consortium is located in Sophia Antipolis too. Among the park’s residents, there are such giants as Amadeus, Toyota, Samsung, Air France, Renault – all 2,500 companies impossible to mention here.

“50 years since its creation, Sophia Antipolis, Europe’s leading tech field has turned into a centre for global technological innovation. Each year more than 1,000 new jobs are created in the tech field in key fields such as artificial intelligence, biotechnology and autonomous and connected vehicles.,” from Sophia Antipolis’ website.

300 days of sunshine per year, 15 ski resorts, 120 km of coastline, served by 35 different ports – the French Riviera is one of the most desirable places to live. That is why PropTech is being developed in Sophia Antipolis: digital technologies in the sectors of real estate, construction, asset management, brokerage and smart city.

Sophia Antipolis has also established itself as a sports centre, thanks in particular to the famous Mouratoglou Tennis Academy and the future Stéphane Diagana Sport-Health Campus. This is SportTech – sports assets are developed in cooperation with innovative companies, with the use of advanced technologies.

But most of the fame French technology park gets from its BioTech technologies. There is a 23,000m² BioPark with dozens of companies and research laboratories in Health, Biotechnology, Pharma and HealthTech here.

However, the French people took a look at their “oeuvre” from a different angle too. So, in 2018, director Virgil Vernier released a movie of the same name, dedicated to the technopark.

“The boldest projects are being brought to life here. However, beneath the outer layer of prosperity and success are hidden the frustrations and fears of people who are trying to find their place under the sun,” the description of the film “Sophia Antipolis” includes.

Technopolis, meanwhile, continues to actively grow and builds ambitious plans for the future.