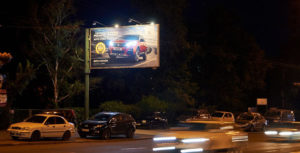 A new Peugeot 3008, the car of the year 2017, shines with headlights on a billboard in Kyiv

This autumn advertisers from the category “Motor Vehicles” have been activated in a non-standard location. As proof we will present the advertising campaign of the Peugeot 3008 by Optimum Media Ukraine agency.

This car was recognized as the car of the year 2017 in Geneva by a full-fledged judiciary commission consisting of 58 European journalists. It has many advantages. One of them is fog lights, which the advertisers decided to illuminate with LEDs.

For the first half of 2017 the category “Motor Vehicles” has increased its budget for outdoor advertising by 89%, which has allowed to increase its market share by 1% from 7 to 8%. Advertising activity of the clients of this category gives hope that by the end of the year it will not lose its speed and fix into the top three leaders in the outdoor advertising market.