Manyata Tech Park: how they create technoparks for 100K residents in India 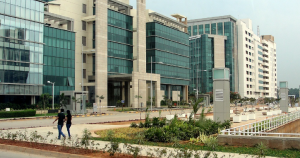 Impossible to leave the workplace for an hour or more – that’s what 100K employees of Manyata Tech Park were afraid of in 2017. The technology park in India has become so big that residents are stuck in traffic jams before they even leave it.

Manyata Embassy Business Park, or Manyata Tech Park, is one of the largest technology parks in India. It is located in the north of a densely populated city and a powerful technological center – Bengaluru. Today the business park is about 1.2 km2. It has indoor transport, an outdoor sports area, a rooftop football arena, a food court with more than 1000 seats, and an amphitheater with 600 seats.

In 2013, Manyata Tech Park received the award as the best IT park in India. Among its residents are Microsoft, Rolls Royce, IBM, Nokia Networks, Philips, Alcatel-Lucent, Target Corporation, Nvidia, AXA, Ikea and many others.

The proportion of companies in the park:

Football on the roof

You can play football on the roof of the 8-story building in the heart of Manyata. The 1,200 m2 arena allows four teams to play at the same time, as it is divided into two equivalent football pitches.

“We are adding many facilities at our office parks to provide our corporate occupiers with increased options for their employees. This football arena is a very interesting concept and Embassy believes in providing unique experiences whether it is related to the world-class buildings at the office parks or any of the recreational or value-added services,” said Mike Holland, CEO of Embassy Office Parks.

Growing their own organic food

Thinking of technology parks, we often imagine a maze of glass and concrete. Manyata is not an exception. However, a few years ago, the park administration allocated part of the territory for land plots where employees can grow their own vegetables, greens, etc.

“The idea was born because we have space and wanted to let people use it as a stress-busting activity,” explained the park administration.

Manyata residents can apply for one of the 170 plots. These are, in fact, mini gardens. Plots and planting materials are provided for free. Workers use the land to grow baby corn, tomatoes, chili, spinach, and more. The harvest can be taken home.

How did it happen

More than 100K employees and regular visitors of the technopark – the number is impressive. The Hilton is located in the park, and the international airport is nearby. Metro construction is also planned. Near the park is a residential complex Manyata Residency with an area of ​​34 hectares.

How did such a powerful conglomeration pop up in India? The fact is that Manyata Tech Park is not just located in one of the most promising in terms of IT development in the world, but also in the most technological city by the standards of India itself. Thus, in 2020, the city of Bengaluru was recognized as the fastest-growing technology center in the world. During 2016-2020, the amount of venture capital invested in local technology companies increased fivefold. London, New York, San Francisco, and Shanghai were left behind.

Locals complain about the huge traffic jams and overcrowding of the technology park with people and transport: 45K vehicles daily, 100K employees and visitors, a shopping center that gathers up to 15K people, new locations, housing and much more.

The management company is working to solve problems and improve the park’s infrastructure. The most ambitious idea of ​​the owners is a nearly 1 km long overpass with a special sleeve for entering and exiting the park on the outer ring road of the city.

“Today we are modernizing the entire infrastructure of the park to improve the experience of residents, facilitate pedestrian traffic, add more locations with food, create additional areas for cooperation and expand greenery,” said on the website of the park.