Kyiv Sikorsky Airport marks 97th anniversary: ​​what to expect next 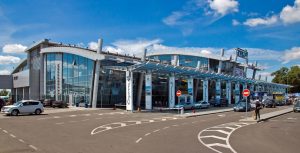 On May 25 Kyiv Sikorsky International Airport, whose majority shareholder is the holding company UFuture, marked its 97th anniversary. It was on May 25, 1924, when the first passenger flight took place at the Ukrainian capital’s airport. Kyiv Airport is one of the oldest in Ukraine.

Denys Kostrzhevsky, Chairman of the airport’s Board of Directors, opened an exhibition of retro photographs in Terminal A depicting the airport in the 1950s, 1960s, and even in the post-war years.

“The 97th anniversary of the founding of Kyiv Sikorsky Airport is a landmark event not only for us but also for the city: there are not many enterprises in the capital, especially technological ones, that can boast about the same long history. The airport is a holder of the latest technologies, and Sikorsky is at the peak of its technologies today. It has upgraded terminals, a runway, and other facilities. The company does not stop in its development and has ambitious plans for the future,” said Denys Kostrzhevsky.

It is planned to carry out large-scale reconstruction in the airport: to extend the runway by 500 meters, to modernize taxiways, aprons, light signaling equipment, etc.

In total, over the last 10 years, more than $90 million has been invested in the development of the airport’s infrastructure and 1,500 permanent jobs have been created. Together with service companies, catering, and other services, the airport generates more than 20 thousand jobs.

“What we see today is an example of a successful public-private partnership. The state has invested in the preliminary reconstruction of the runway and aprons, the city has allocated land and leased old buildings, and a private partner has built new terminals and inspired the enterprise with his business ideas. Prior to that, for 20 years, the airport was in decline: it served 1-2 flights a day and had no prospects, and the city budget allocated about 11-12 million UAH of subsidies annually”.

Currently, due to coronavirus restrictions, the airport is loaded at 25-30% of the planned capacity. However, the company managed to restructure its work, save the team and payments.

“Before Covid-19, we had at least 40 flights a day, and now – 6. The most important thing was to restructure the staff, maintain infrastructure, maintain ground equipment – otherwise we would lose airlines. Today, we are increasing capacity and recruiting staff,” said Igor Serdyuk, the airport's Deputy General Director for Ground and Passenger Services.

“Aviation, tourism will be reborn. Progress cannot be stopped. In three years we will celebrate the 100th anniversary and – after the reconstruction – will have a safety margin for another 100 years,” sums up Denis Kostrzhevsky.