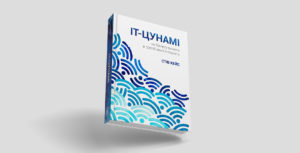 K.FUND PRESENTS UKRAINIAN EDITION OF THE BEST-SELLING BOOK BY STEVE CASE “THE THIRD WAVE: AN ENTREPRENEUR’S VISION OF THE FUTURE” AT IFORUM

Vasyl Khmelnytsky’s K.Fund has dedicated the Ukrainian-language edition of Steve Case’s best-selling book “The Third Wave: An Entrepreneur’s Vision of the Future” to iForum. The book is available at the forum, as well as in stores from the beginning of June.

Kyiv, May 23, 2017 — Vasyl Khmelnytsky’s K.Fund will present a new edition at iForum on May 25. The author of the book and a co-founder of America Online (AOL), a symbol of the birth of the Internet, offers detailed instructions for start-ups to survive in the world, which will soon be hit by the third wave of the Digital Age.

“What’s emerging is the much broader Internet of Everything. The entrepreneurs of this era are going to challenge the biggest industries in the world, and those that most affect our daily lives. They will reimagine our healthcare system and retool our education system. They will create products and services that will make our food healthier and our commute to work easier,” the author writes in the Preface to the book

Steve Case is an Internet pioneer, one of those who have made the Internet part of everyday life. During the 1990’s, his company AOL was one of the world’s most successful businesses. When Steve founded it in 1985, nobody believed in the possibilities of the Internet, and entrepreneurs in the industry would face multiple failures. Those who decided to carry on turned to be real innovators.

Steve Case described that period as the first wave of the Internet. The second wave, which began with the 21st century, gave the world Google, Facebook and Amazon. But the time of incredible start-ups built in garages is rapidly passing. It is being replaced by the third wave — the real Internet of Everything that will turn the world upside down.

Only the businesses that will have knowledge, flexibility and ability to work in a team will survive this wave. In his book “The Third Wave” Steve Case openly shares his experience and gives recommendations to a new generation of entrepreneurs. And this is how he outlines the path forward. After all, the era we are about to enter will be as grand and as uncertain as when the Internet was born.

The book was published as part of the K.Fund Books project.

K.Fund was founded in 2015 by Ukrainian entrepreneur Vasyl Khmelnytsky to support projects in the economics and education. The mission of K.Fund is to provide the keys to development and implementation, to provide opportunities for acquiring new knowledge and skills, to promote discoveries and help to reach a new level.