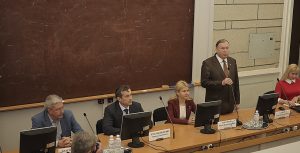 Businessman Vasyl Khmelnytsky’s K.Fund and Kharkiv Polytechnic Institute will build and open in Kharkiv the Innovations Campus educational space worth more than UAH 60 million by the end of 2018, the press service of the UFuture investment group has reported.

“Construction work is due to begin in April, and the campus will start operating at the end of 2018. The task of the project is to enable Ukrainian specialists to develop and be successful in Ukraine,” the report says

The training will be based on an innovative educational program, which was developed by UNIT Factory specialists in cooperation with Kharkiv Polytechnic Institute and other Ukrainian higher educational establishments.

In addition, the Small and Medium Entrepreneurship School will continue its work at the campus, whereas modern co-working will open the possibility for start-ups and creative young professionals to get jobs, qualified professional business support, security, access to knowledge.

The organizers also plan to attract investments from the state, enterprises and local business to finance this social and educational project.

As reported, First Vice-President of the Ukrainian League of Industrialists and Entrepreneurs (ULIE) Vasyl Khmelnytsky is the majority shareholder of UDP.

In early October 2017, he merged his business projects and social initiatives under the brand UFuture Investment Group (Brussels). The chief managing director of UFuture became the head of the ULIE office in Brussels, Mykola Tymoschuk.

The group included UDP, as well as businesses of Khmelnytsky: UDP Renewables, Bila Tserkva industrial park, innovative parks UNIT.City and LvivTech.City. The group is open to the creation of joint ventures and the attraction of new partners.

Support of social projects in the sphere of economy and education is provided by Khmelnytsky’s K.Fund.

UDP is one of the largest development companies in Ukraine. It has been operating in the market since 2002 and has implemented 11 projects with a total area of 3 million square meters. Among the most famous projects are the development of Kyiv airport, the construction of the Ocean Plaza trade and entertainment center and the RiverStone and Parkove Misto residential complexes in Kyiv.