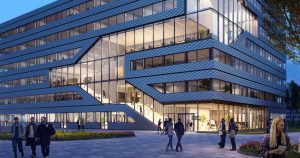 Due to incomprehensibility and complexity, science is increasingly losing supporters, although this is one of the foundations of progress and a large-scale investment field.

"A lot of talent is a sense of constant progress and innovation," said Leo Le Duke, director of the Science and Business Organization of the Amsterdam Science Park.

Amsterdam Science Park became such a place of accumulation of talents, progress and innovations in 2009. Now the area of ​​the park is 70 hectares. Its residents are the owners of various scientific projects and businesses. Among the first, in particular, are the institutes of natural sciences of the University of Amsterdam, several research institutes and related companies. The park created the conditions for free coworking and allowed researchers, together with the resident entrepreneurs present in the park, to develop innovative products and developments in the “green” economy.

Amsterdam Science Park has long used computational science to determine the future. The field of research of scientists is quite wide: from artificial intelligence to quantum calculations. Both researchers and science park entrepreneurs believe that artificial intelligence can extend human life, and quantum software will change the current computing landscape. It is home to many research institutes, the Center for Mathematics and Informatics, the SURFsara Quantum Internet Alliance, the Dutch Center for Electronic Sciences and the Institute of Informatics of the University of Amsterdam. A strong knowledge base and excellent infrastructure have also led to cybersecurity discoveries, quantum software, computational imaging, computer vision and high-performance computing.

"People here are ready to think out of the box," said Professor Max Welling, lead researcher in the field of artificial intelligence at the Amsterdam Science Park and director of the QUVA Lab.

The Netherlands is home to the European Internet. It is believed that this is the best connection in the world. The park has 600 network hubs that connect 80% of European countries in 50 milliseconds. It’s not just cables that make connections. The park is a shared space where businesses, scientists and innovators come together for discoveries.

Researchers are working closely with the business community to turn innovative science into new products and innovative services. For example, at UvA Bosch Delta Lab, the team focuses on a more scalable and cost-effective solution for self-driving cars. Emphasis will be placed on the use of such vehicles in technology, artificial intelligence and machine learning.

In 2019, the National Center for Innovation for the Development of Technologies at the state level was established in the Amsterdam Science Park. The initiative aims to promote innovation between academia, industry and government in the field of artificial intelligence. The institution works closely with other parks, including life sciences, sustainability and high-tech materials.

The number of students in artificial intelligence courses is growing by 15% annually. This increase is provided by university programs, which are updated every year. It allows graduates to invent new developments and not repeat after students of previous years. The high level of innovation in the Amsterdam Science Park has already attracted many multinational companies’ attention. The successful Scyfer startup, born here, was taken over by the global company Qualcomm, and the digital branch of ABN AMRO has created another division in the Amsterdam Science Park.

Companies such as Bosch, Ahold Delhaize, Tata Steel, Elsevier come here to be among the first to take advantage of the park’s new technological achievements. Public authorities, such as the National Police, are not far behind.

Like nowhere else in the world, the Amsterdam Science Park understands the diversity of climate change, resource scarcity and sustainability. To solve them, the park’s residents are working together in green development — chemists, physicists, ecologists, biologists, IT specialists and scientists from different fields are working on sustainable development projects. It allows for faster results in renewable energy, climate forecasting, new materials, biofuels, seed production and water management.
One of the current initiatives is the innovative work of the University of Amsterdam in sustainable chemistry. Research findings in this area can help entrepreneurship and indicate a new, sustainable and socially responsible way of doing business.
Renewable energy is another crucial area of ​​research for the Amsterdam Science Park. Interdisciplinary teams from several institutions — AMOLF, the University of Amsterdam and ECN — are inventing the solar battery of the future, which is planned to be a serious alternative to fossil fuels by about 2030.

The Future Planet Studies program at Amsterdam Science Park teaches students to look at climate from an interdisciplinary perspective. And several multinational corporations are already using the park’s knowledge network on the path to sustainable innovation. These include Akzo Nobel, BASF, Cargill, Michelin, Pepsico, Shell and Waternet.