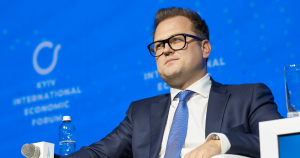 We think we know where the money comes from: it is printed by the central banks, of course. But don’t be that sure. Most of the money in the world is brought not by central banks, but by private ones. And they take them out of nowhere. Literally. They simply pump up the world with liquidity without value, Nicholas Tymoshchuk, CEO of the UFuture holding company, wrote in an op-ed for NV Business.

Aren’t the central banks those who print trillions and borrowing them to private banks, and those – to companies and people? And doesn’t the money of central banks get value from the country’s GDP? No and no. Central bank loans are issued to private banks only for the reserves, which constitute a meager share of the capital of the private banking system.

The real role of central banks

It would seem that we know how the world financial system works. But most are unaware of the devil behind the details, which has been building inequality around the world for decades and causing a global economic collapse every 10 to 20 years. Storm is rising once again in the financial markets, causing for many of us a frightening uncertainty.

At the same time, each crisis only deepens the income gap: the rich get richer and the poor get poorer. After the collapse, usually, those who have no money are forced to borrow and so they enrich those who still have money.

Read more about how economic crises arise and how the global financial landscape works via the link.