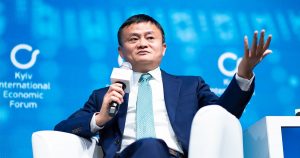 Future in a changing world: KIEF-2019 was held in Kyiv

On November 8-9, Kyiv International Economic Forum-2019 was held for the sixth time at the Kyiv International Convention Center Parkovy. The event was dedicated to the topic “the future in a changing world.” To discuss global trends and shape the development vector in 2020, influential international and Ukrainian experts, entrepreneurs, government officials and parliamentarians came to Kyiv.

We launch a series of reports from the main business event of the year, a strategic partner of which is the holding company, UFuture.

The first day of the forum was opened by a welcome speech by President of Ukraine, Volodymyr Zelensky, who encouraged businesses to invest in Ukrainian youth, start-ups, and small and medium-sized businesses. Zelensky also noted that today’s global economy is actually a talent economy, and economic growth in the world is driven largely by innovation.

“The Ukrainians are ready to become pioneers, the Ukrainians can look into the future and understand the needs of tomorrow. The Ukrainians are very talented, hardworking, creative, and courageous. And that is exactly what your investment needs. So invest in people. Invest in our youth. Invest in Ukrainian startups, small and medium-sized businesses, with every Ukrainian. People are our biggest capital. This is the “made in Ukraine” that we are proud of and which gives us a competitive advantage… Their talents, skills, their intellect, their mind. It seems to me that this is our greatest treasure, and it has always been so. But we’ve underestimated it,” the head of the state said to the participants of the event.

The opening of the forum continued with appearance of the special guest, founder of Alibaba Group, business-guru, Jack Ma. The Chinese billionaire shared his vision of Ukraine’s development and its potential, the principles of doing business, building a team and the impact of artificial intelligence on humanity. The headliner’s main points were related to important life lessons, education, and success in general.

“I am not afraid of the future and don’t worry about it. As an entrepreneur, I have to predict the future. When I see new technology, I have to embrace it. And if I cannot predict the future, I hire a person to handle it. We at Alibaba have made a lot of mistakes — you can’t even imagine how many. Mistakes in investment, personnel and management decisions. But I would advise learning from the mistakes of other people, it will make you stronger. The future is not in the knowledge, markets, or even technology. It’s necessary to invest in people, education, and development. Invest in education. Invest in young people. In small and medium businesses. This is the key to development,” Jack Ma said.

Introducing the theme of interpretation the future in the coming decades, Vasyl Khmelnytsky, Founder of UFuture holding company and the initiator of the forum, presented artificial intelligence, INDAX, based on the accelerator of UNIT.City innovation park and highlighted the top five trends of the future.

“The uprising of machines is still very far, but today, computers are unable to process a huge amount of data and perform tasks that are beyond human power. UNIT.City innovation park was unable to ignore the impact of the technologies of the future. Based on an innovative accelerator, we will create our artificial virtual partner, business analyst, and strategic advisor, INDAX. According to INDAX, in the future, we won’t be able to live without the Internet of things, such as smart assistants and various sensors, urbanization with the conglomeration of 80% of people in big cities, climate change due to pollution of the planet, robotization as a result of Revolution 4.0 with the disappearance of 75 million workers and changes to the human genetic code and the emergence of a new species — Homo Sapiens 2.0,” Vasyl Khmelnytsky, Founder of UFuture, said.

The second day of Kyiv International Economic Forum was opened by a dialogue between CEO of UFuture, Mykola Tymoshchuk, and Prime Minister of Ukraine, Oleksiy Honcharuk, on the future of the Ukrainian government in particular and the economy as a whole. In his speech, the Head of government outlined the government’s priorities and outlined the necessary steps to create a favorable business atmosphere in Ukraine. Prime Minister also emphasized that Ukraine has the enormous potential and at the same time a “homework” to increase the country’s investment attractiveness.

“The world wants to trust Ukraine, and we must justify that trust. This requires no fear and decisive steps. We need to do our homework. Our country has a fantastic potential. It’s possible to do much more for a foreign investor than it’s in their jurisdictions. It’s interesting to invest here, the only problem is that there are very high risks. There have been very high risks. And our task is to prove that one can trust us. We just have to start executing contracts as a country and as a society. Both internally and externally. We must be trusted,” Prime Minister of Ukraine, Oleksiy Honcharuk, said.

One of the hottest panels of the forum was “Ukraine on the World Economic Map”. Key speakers were Minister of Economic Development, Trade, and Agriculture of Ukraine Tymofiy Mylovanov, President of the pharmaceutical company and Chairman of the board of directors of the group of companies Tribo, Kostyantyn Efymenko, and CEO, co-founder of Reputation Institute Nicolas Georges Trad.

Tymofiy Mylovanov spoke about the economic course of the new government and the main priority reforms that his team plans to implement. Discussing the country’s place in the world economy, Kostyantyn Efymenko expressed his vision of economic development in terms of the business community. According to him, the state should provide cheaper loans and simplify the processes of connection to the grids and obtaining environmental permits.

“Our secret of success is that we just work almost seven days a week. We would overwork anyone. Tribo Group companies now have a turnover of $150 million, we are the supplier for the Peugeot Citroen’s conveyor, the supplier for Renault, Nissan, Mitsubishi, and Volkswagen. We complement Volkswagen and Skoda models. Biopharma turnover today is almost $100 million, the company has opened a new plant. In the next three years, the turnover will be $300 million. Today we control 4% of the Indian market and this is only the beginning. For the Ukrainian industrial sector to be successful, it first needs to understand where we are. We are interested in cheap loans as a business. No one would invest at 20% per year now. I don’t see it on the agenda. All difficulties in connection to the grid and obtaining environmental permits must be eliminated,” Kostyantyn Efymenko said.

Co-founder of Reputation Institute, Nicolas Georges Trad, said that to create a positive image of Ukraine, it’s necessary to find and use those points that will embody the Ukrainian identity and, on their basis, to create messages that should be broadcast to the world.

“Today’s reputation is an economic price tag. We are trying to help countries and governments build a reputation — we need to make people feel positive about you. It’s necessary to identify the segments that are attractive to investors and work with them. One of the problems is building confidence. First, you need to create an image within the country, and then retransmit it from the outside. Investors are not investing in Ukraine because of the danger. Investment risks are too high now. It’s necessary to find the originality of Ukraine — this is a question for historians. We need to find out what your uniqueness is. I think it will change the mentality. It’s possible to build an image on your history, the national heroes,” Nicolas Georges Trad emphasized.