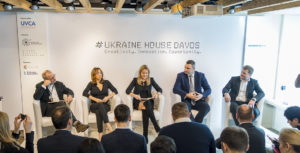 FOLLOW-UP ON DAVOS 2018. The main highlights from Nicholas Tymoshchuk, CEO of UFuture

Despite preceding skepticism and growing public distrust in the effectiveness of discussion platforms, World Economic Forum Annual Meeting in Davos 2018 was big and bold.

Once again WEF Annual Meeting summoned the world’s most influential political and economic leaders, outstanding scholars, social activists and opinion leaders. There were 400 sessions only on the meeting’s official program, this does not include hundreds of events, forums and gatherings around the meeting. Moreover, the town’s main street Promenade was traditionally jam-packed with houses of countries, corporations, NGOs and media outlets from all over the globe.

The global community has now officially acknowledged that:
– Our civilization is fractured, both ideologically and economically.
– Today’s biggest advocates for globalization are not US and Europe.
– 4th Industrial Revolution is taking over: we better learn how to coexist with the artificial intelligence, and we better do it fast.

– 82% of wealth in 2017 went to the richest 1% of the global population.
– A new billionaire appears at a rate of one every two days.
– Billionaire wealth has risen by an annual average of 13% since 2010 – this huge increase could have ended global extreme poverty seven times over.

– By living standards, inclusiveness and economic sustainability small European countries excel, while the rest of the world has to catch up. For example, on the above benchmarks USA ranks 23rd globally, China – 26th, India – 62nd out of 103 countries.
– “France is back at the core of Europe” assured President Macron, adding there would never be “any French success without a European success”.
– Angela Merkel stated that “isolation and shutting ourselves off will not lead us into a good future. Protectionism is not the answer.” She also reminded that “ever since the Roman Empire, ever since the Chinese Wall, we know that shutting ourselves off doesn’t help”.

– Indian Prime Minister Narendra Modi, leader of the fastest growing economy and largest democracy in the world, said the country is “cutting the red tape and rolling out the red carpet” to international trade and investment.
– India remains the world’s fastest-growing economy in 2018, with a projected growth rate of 7.4%.
– Other 2018 projected growth leaders: China – 6.6%, USA – 2.7%.
– IMF raised its global growth forecasts for 2018 and 2019 to 3.9%.
– About half of the forecast’s increase is attributed to the new US tax package, which is expected to boost growth in the United States through 2020, and have a positive knock-on effect on its trading partners.
– “America first does not mean America alone,” US President Donald Trump said in Davos.

Love for science and science of love

– CERN (European Organization for Nuclear Research) Director General Fabiola Gianotti said “the passion for knowledge and learning is a shared passion for all of humanity. Scientific knowledge has no passport, no gender and no political party.”
– Jack Ma offered a way for humans to beat the age of automation: “If you don’t want to lose quickly you will need a high IQ, and if you want to be respected you need high LQ: the IQ of love.” He also noted that “the computer will always be smarter than you are; they never forget; they never get angry. But computers can never be as wise as a man. The AI and robots are going to kill a lot of jobs, because in the future it’ll be done by machines. Service industries offer hope, but they must be done uniquely.”
– On the other hand, Google’s chief Sundar Pichai repeated that “artificial intelligence is more important to humanity than fire or electricity.” He said that despite concerns about AI, the potential benefits couldn’t be ignored.

First ever Ukraine House in Davos

– It was a big success even just because it has finally happened. A national house in Davos is a must-have for any state, let alone for the biggest country in geographical Europe, one of the global leader in IT and agriculture, and a historical geopolitical player.
– Ukraine House put together a week-long highly saturated program, mostly dedicated to investment and innovation.
– Apart from numerous international celebrities, including Robot Sophia, Ukraine House was endorsed and attended by the most prominent Ukrainians: President Petro Poroshenko, Klitchko brothers, business leaders Viktor Pinchuk (East One Group, Pinchuk Foundation) and Vasyl Khmelnytsky (UFutrue Investment Group).