Bridges, satellites and medicine: trends and forecasts for the 3D printing market in the world 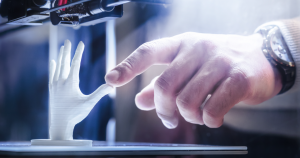 “This constructor is both efficient and flexible. I feed magnetron plastics – the stuff they make houses and ships of nowadays – into this moving arm. It makes drawings in the air following drawings it scans with photo-cells. But plastic comes out of the end of the drawing arm and hardens as it comes ... following drawings only”.

In 1945, a fantastic novel by American writer and inventor Murray Leinster “Things Pass By” was published, where the “constructor” was described. Leinster, in fact, was the first to explain the general concept and process of three-dimensional printing. Today such a “constructor” is called a 3D printer.

In 2020, the global 3D printing market reached $14 bn and is projected to grow 20% over the next seven years. 3D printing today is most often used in:

In 2018, a pedestrian bridge was printed for the first time in the Netherlands. The MX3D robot manipulator with a welding machine, in fact, “grew” a bridge out of steel wire. The project lasted about three years: the 12-meter bridge was successfully built and passed all the necessary tests.

A pedestrian bridge was soon printed in Spain. The cement powder bridge was installed in the south of Madrid. One of the designers of the bridge is Enrico Dini, the creator of a 3D printer for printing large objects, including high-rise buildings.
Two more pedestrian bridges printed on 3D printers are installed in Shanghai, China: one is made of concrete, the other is made of engineering plastic.

Aerospace corporation Airbus has given permission to manufacture polymer components for its aircraft to one of the leaders in the three-dimensional printing industry, Materialise, which, by the way, has an office in Kyiv.

Boeing, Airbus’s main competitor, orders thermoplastic parts from the US-Israeli company Stratasys, and in general, intensifies the use of additive manufacturing technologies (a term for the industrial application of 3D printing – ed.).

At the same time, the American company Zenith Tecnica, whose key specialization is the printing of titanium elements, has been cooperating with the manufacturer of space satellites Maxar Technologies for five years: during this time they have manufactured 260 titanium components for their satellites.

In October 2019, Apis Cor built the world’s largest printed building. Located in Dubai, the 640 m2 and 10-meter high building entered the Guinness Book of Records as the largest building printed directly on the construction site.

In Europe, a two-story house was printed for 15 days last year with the help of COBOD’s giant BOD2 cement printer. The house is planned to be rented out for offices, or, possibly, as housing.

Printed houses appear all over the world: the United States, Saudi Arabia, Mexico, France, the UAE, and others. Many believe that home printing is the future of architecture, and it is 3D printers that will be able to solve the problem of providing people around the world with good housing.

For example, in 2001, world surgery star Anthony Atala transplanted an artificial bladder to boy Luke Massella. Atala’s team noticed the ordinary 3D printer and created special software for it. Subsequently, special machines were made for the laboratory to “grow” 30 different types of cells and organs, as well as cartilage and bone.

There are many such cases in medicine.

For example, doctors at Johns Hopkins University (Baltimore, Maryland, USA) removed the patient’s ear and part of the skull affected by the tumor. Taking cartilage from the chest, blood vessels, and skin, they grew a new ear on her arm and then transplanted the artificial organ into place.

Operators of 3D printers have undertaken the production of personal protective equipment and components for medical devices, such as ventilators. Due to the disruption of global supply chains, which made it much more difficult to transport parts from abroad, 3D printers began to be used more actively by companies to create prototypes and end-use parts. Engineers also intensified work on 3D printers, as there were periods of downtime during which they could focus on research and development, testing, and prototyping.

The main obstacles for the widespread use of 3D printing:

3D printing is very expensive, technologically complex, and difficult to scale technology. However, thousands of companies around the world are engaged in it. There are more and more startups for which investors do not spare money. The prospects of 3D printing are too impressive to be abandoned due to its complexity or cost.