Bagmane Group Technology Parks in the wealthiest areas of India 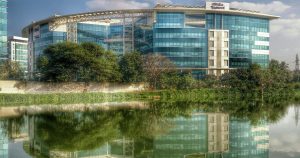 Until the early twentieth century, India was the only source of diamonds in the world. The sixth-largest democratic country in the East is remarkable not only for rebooting but also for expanding the business world. A real “diamond” for those who are always looking for development is the technology park of Bagmane Group, located in Bengaluru in southern India.

Founded in 1998 by the developer of the prestigious Bagmane Group business parks, the technology park is the company’s first project to create workspaces in key local micro markets. Bagmane Group business parks have a reputation for the highest quality and offer many benefits — on-campus collaboration experience, modern design, futuristic materials, and a wide range of amenities.

"We have a full range of skills and capabilities to support the development of commercial space. We have been pioneers in developing next-generation jobs, effectively supporting the needs of knowledge corporations from the outset of India's industry. The most prestigious business parks are named Bagmane and are a marker of impeccably designed and built offices and coworking spaces in beautiful places," says one of the company's central theses.

Like a marker, each Bagmane Group project has the same architectural style: a large-scale glass façade and precise geometric shapes.
As the company positions itself as a builder of workspace for the future, the same approach to facilities justifies world architects’ opinion. Glass facade is an important aesthetic element that shapes the surrounding space. By blurring the line between indoor and outdoor, glass expands the boundaries of living or working areas and “draws” the surrounding landscape into the interior — incredible gardens and artificial lakes in the case of Bagmane Group parks.

Each park of the group is a separate “pearl”, made with conscious luxury for the best companies in the world and those who strive to reach the set high bar.

The technology park is located in the city’s wealthiest area — CV Raman Nagar, where software development companies are situated. It offers a convenient infrastructure for East Bengaluru and an internal ecosystem for companies that will promote growth, climbing, and networking. Representatives of well-known companies such as Oracle, Texas Instruments, Nike, Dell, EMC, Boeing, PWC, Microfocus, Grant Thornton, Informatica, CISCO, Hotstar, Volvo, Sap Concur, Cypress are located in the 170,000 m2 of the park.

The business park is distinguished by impeccable planning, design and the ability to get a job in the future. It is 10 years younger than its predecessor, founded in 2008, and has an area of ​​120,000 m2. The key residents are the conglomerates of the world of technology and communications: Google. Amazon, Samsung, Qualcomm, Publicis, Redhat.

The company defines the park as the “capital”. After all, the main idea behind Bagmane Capital’s infrastructure is easy to compare to a metropolis: an ecosystem solution designed to provide newcomers with the best jobs of the future. The same principle drives people from the regions to get and work in the capital. The area of ​​the park is 290,000 m2. Now it houses Google, BNP Paribas, First Abu Dhabi Bank.

Bagmane Group has at least three other facilities — not just parks, but “city”, “district” and “centre”. The company is developing an ecosystem approach in the construction of space for a new generation of employees in technology, communications, and finance. And the format of just a technology park for India seems to be getting too small, forming new horizons and meanings of innovation space.