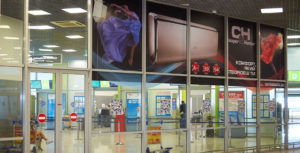 Advertising in Zhuliany is constantly updated. In September summer advertising campaigns are still in progress, but there are new Customers with interesting creative projects too. It would be desirable to mention the brand of air conditioners Cooper & Hunter with non-standard advertisement on the glass wall between the Hall leading to customs and passport control and the “clean” zone of the airport.

In the summer the white Land Rover gave its exposition place in the Central Hall of the Terminal A to a new exquisite red Mazda CX-5. Our Client is Winner Imports Ukraine, the official importer of Ford, Volvo, Jaguar, Land Rover and Porsche in Ukraine.

All the summer promoters of the DOM Info Group are working in the Terminal A informing passengers about the best property offers in the European Union countries. The campaign will continue in September 2017.

At the beginning of September the next issue of the magazine of KYIV International Airport (Zhuliany) appeared. It is distributed in the airport terminals, the racks are replenished in time.