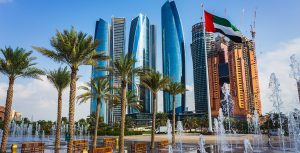 It was the United Arab Emirates who led the Gulf states in moving their economy away from fossil fuels long before the drop in oil prices. Nearly 70% of green energy in the region is generated by the UAE. Considering the prospect that their estimated reserves could run out in 50 years, the country’s leaders have been investing in tourism, tech and renewable energy. Today almost 3/4 of its GDP comes from non-oil sectors.

In January 2019, Abu Dhabi hosted the World Future Energy Summit, the largest sustainability event in the Middle East. According to IRENA chief Adnan Amin, the state’s decisive move towards a renewable energy future is a signal to global investors and to the energy community that they are experiencing a true energy transformation.

The country has built the world’s biggest concentrated solar power project in Dubai, which will use two technologies: the 600MW parabolic basin complex and the 100MW solar tower over a total area of 43 km2. The state also plans to install rooftop solar on every home in the emirate by 2030 and has already constructed here a net-zero emissions residential neighbourhood. As Emil Samarah, one of the developers, emphatically affirmed, whether the UAE is an oil state or not, its citizens need to take care of the Earth and future generations.