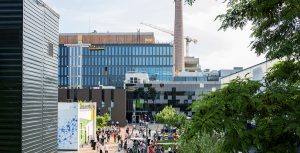 A new business campus of the UNIT.City Innovation Park with the Chasopys.UNIT co-working place has opened in Kyiv

Ukrainian IT talents have received another important argument in favor of the industry development in the country. A new business campus of the UNIT.City Innovation Park with the Chasopys.UNIT co-working place has opened in Kyiv.

Many incumbent and future residents of the innovative city – more than 500 people – gathered to celebrate a house-warming party on Thursday, June 14.

“Our main task is to help talented people grow and succeed in our country but not abroad, create big companies. This is a challenge to build not only a modern city but also a space for new opportunities for the development of a creative economy of the country,” founder of UFuture Investment Group and one of the major investors in the project Vasyl Khmelnytsky said

The building with an area of 3,800 square meters is designed for 360 people to work comfortably at once.

The project of the new building was created by the Odesa architectural studio Haliulin Architects. The campus has the shape of a cube, while three types of glass were used in construction.

“If to walk along the building, it seems to be hovering in the air, going up and down along the axis,” CEO and Managing Partner of UNIT.City Max Yakover said

Some 50 well-known companies have entered or selected offices in the new campus, including SolarGaps, a Ukrainian startup in the field of alternative energy, the Quadrate28 marketing agency, ARbrowser, LookinAR, and Crosslytics.

The Fedoriv creative agency plans to become a resident of UNIT.City. Andriy Fedoriv is seeking a location in the innovative city building being under construction, the opening of which is scheduled for this year.

“Chasopys.UNIT is the fourth co-working place of the Chasopys network,” CEO of Chasopys Creative Family Aliona Kalibaba said. According to her, the best practices achieved in the last six years were united in the design of the building.

“The campus events calendar is being filled in. Schools of entrepreneurship, international competitions and a form of expert Fridays will be held here,” Kalibaba added.